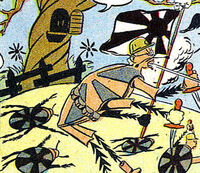 Base of Operations
Nowhere
Affiliations

The Japanese Beetles are creatures that exist in the realm of Nowhere outside of what is called the Victory Garden. They are the product of Jimmy Jupiter's imagination. They invade the Victory Garden in order to destroy the vegetables being grown there but are constantly opposed by its defenders, swarms of crows and Mantis Marines. They are inspired by the Imperial Japanese army.[1]

Weapons: Each member of the Japanese Beetle army is armed with an automatic weapon.

Retrieved from "https://marvel.fandom.com/wiki/Japanese_Beetles_(Nowhere)_(Earth-616)?oldid=5270462"
Community content is available under CC-BY-SA unless otherwise noted.