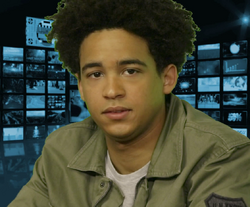 Jason was a student at Midtown School of Science & Technology, and an anchor of the school's news.

He asked his co-anchor Betty Brant to the school's homecoming dance, but she rejected him on air.[1]

Ionello was snapped out of existence by Thanos [2] and resurrected by Bruce Banner five years later.[3] Over the next eight months, Ionello had to contend with the fact that his younger brother, who survived Thanos's massacre, was now older than him, and that he had to restart the school year from scratch despite having taken midterms before being snapped.[4]

Like this? Let us know!
Retrieved from "https://marvel.fandom.com/wiki/Jason_Ionello_(Earth-199999)?oldid=6445029"
Community content is available under CC-BY-SA unless otherwise noted.