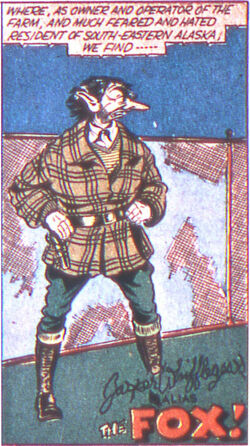 Jasper Whifflegrass -- aka "The Fox" -- was a fur trapper who operated in Alaska during the 1940's. A greedy man who sought illegal means to make it rich, he discovered a way to ship furs from Alaska to Washington State via an underwater tunnel that ran between the two locations. His operation netted him a great deal of money, and the lack of legitimate shipping methods put a number of fur shippers out of business in the Seattle area. His activities attracted the attention of the Sub-Mariner who stumbled upon the Fox's secret tunnel.

Travelling through his underwater tunnel with his henchman Red aboard a two-man sub, the Fox was chased to Washington by the Atlantean king. There, the Fox abandoned his henchmen and attempted to retreat back to Alaska. The Sub-Mariner caught up to Whifflegrass and captured him with ease, turning him over to the authorities and exposing his criminal operations.[1]

Jasper Whifflegrass was an expert fur trapper and skinner, and something of an engineer.

Jasper developed a means of shipping furs illegally from Alaska to Washington State through an under water tunnel that ran the length between the two locations. To this end, he would load up his furs in water tight torpedoes that would travel the distance and would be towed into the receiving end and collected with a series of powerful magnets.

Whifflegrass armed himself with a pistol.

Whifflegrass had his own personal submarine that could carry at least two passengers.

Alaska (State) was an independent territory and not part of the United States until 1959. As such, a legitimate business trading furs from Alaska would have to deal with customs and import taxes shipping furs into the United States, thus leading to Whifflegrass to devising his elaborate scheme.

Like this? Let us know!
Retrieved from "https://marvel.fandom.com/wiki/Jasper_Whifflegrass_(Earth-616)?oldid=5274127"
Community content is available under CC-BY-SA unless otherwise noted.