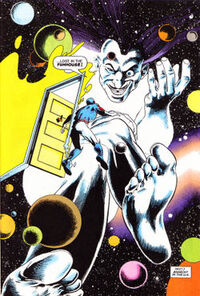 "Jaspers' Warp", also known as "Crooked World", was a Marvel UK storyline featuring primarily the character Captain Britain. It was originally published between 1981 and 1984.

On Earth-238, which was nicknamed the "Crooked World", Mad Jim Jaspers and his Crazy Gang took over the country and began using his reality warping powers to cause chaos.[1]

When Captain Britain returned from Earth-238 he found his world repeating the events. Sir James Jaspers gave a speech denouncing the superhumans of the world. It was at a fundraising event he first noticed that he turned his white wine into red. Merlyn and Roma witnessed this and saw the threat coming to the country. After the party he contacted Vixen and told her to prepare S.T.R.I.K.E. to wipe out the superhumans of the nation at the end of the week.[2]

Vixen now worried that he had gone to far broke into 10 Downing Street but found the laws of physics broken by his powers. On a whim he turned her into an actual "fox".[3] Jaspers now mad with power let his reality warp spread across the nation mutating the population into Warpies. Captain Britain rushed to stop him but when he entered the office he had become one with the universe.He held the hero aloft while looking over while viewing the chaos below. He tortured Captain Britain with false memories until he grew bored. When he recovered he tried to attack him but easily changed forms, he then trapped the hero in a combine harvester and left him for dead.[4] He then used his powers to create the Crazy Gang wacky group of superhuman beings. The Fury arrived on Earth-616 and attacked Jaspers after recognising that this Jaspers was not the same man it was forbidden to kill. He tried to vaporize him but Jaspers just rebuilt his body from scratch. The two battled taking on multiple forms but ultimately lead to a stalemate.[5]

After a reality-warping battle, The Fury managed to kill him by teleporting the pair outside of the universe, where Jaspers had no reality to control and was thus powerless. The Fury then, in its weakened condition, was destroyed itself by the one hero that had escaped from Earth-238, Captain UK.[6] Although Saturnyne took a sample of Jaspers DNA with the intention of cloning him, the DNA was secretly destroyed by Merlyn's daughter, Roma.[7]

The event had long lasting effect on the UK as many children mutated by unstable dimensional energies became known as Warpies.[8]

The story features Alan Davis's first work on Captain Britain. Dave Thorpe left the series and Alan Moore took up the work providing his only work with mainstream marvel comics. It was during this story that Earth-616 is first designated.