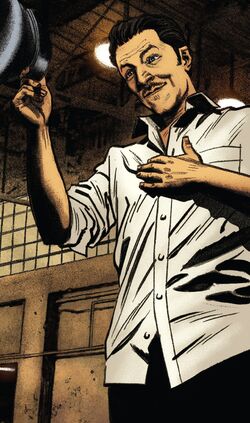 Jean-Paul first met Marc Spector, when Spector was enrolled in illegal fights. The two became close colleagues and Marc took to calling him "Frenchie". Frenchie and Marc shared several adventures together, but their relationship grew even stronger when Marc decided to take up the mantle of Moon Knight. Frenchie worked with Spector for many years as the pilot of a specially designed Moon-Chopper.[1][6]

Jean-Paul was caught in a series of fire bombs set at Spencer Mansion by Moon Knight's brother, Randall Spector.[7] As a result of his injuries, Jean-Paul lost the ability to walk and was confined to a wheelchair.[8]

Jean-Paul discovered he was the last of the Bloodline heritage, genetically conditioned to serve as the living memory for the Knights Templar. The Knights saw themselves as the true keepers of history, untethered to the biases found in various "official" histories of the world's events. Although they kept physical documents in their archives, a failsafe was designed in the Bloodline Agenda. The original Bloodline was engineered so that each of his descendants would subconsciously inherit the memories of their forefathers. In this manner, none of the knowledge of history could ever truly be lost so long as the Bloodline continued.[citation needed]

With the Knights Templar under attack from within by Seth the Immortal, Jean-Paul was considered the last hope of the Templars. Once his hereditary powers were activated, Jean-Paul should have been able to access the full knowledge, memories, and skill sets of his ancestors in the Bloodline. His injuries, however, prevented him from accessing the Bloodline fully. Instead, in times of stress he would physically manifest his ancestors, transforming into a healthy and mobile duplicate of his predecessors with their identities intact.[4]

It was later revealed that Frenchie was a homosexual, and that he had been physically attracted to Marc Spector for many years. He had become involved with his physical therapist and business partner, Rob Silverman,[9] and began using cybernetic legs to walk.[10]

After leaving his job alongside Marc, he started working in a restaurant as a waiter.[11] And, some time later, he was asked by Marc to look after his daughter, having done so gladly.[12]

Frenchie is a skilled helicopter pilot and an above average hand-to-hand combatant.

Retrieved from "https://marvel.fandom.com/wiki/Jean-Paul_Duchamp_(Earth-616)?oldid=6420559"
Community content is available under CC-BY-SA unless otherwise noted.