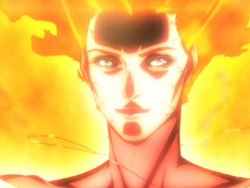 Jean was a member of the X-Men. At some point, Jean lost control of the Phoenix Force due to being manipulated by Mastermind. In order to prevent herself from destroying the world, she ultimately took her own life to keep her loved ones and the universe from being killed by her Dark Phoenix persona.

Professor X and Cyclops were later guided by Jean's voice, suggesting that she was not gone for good.

Like this? Let us know!
Retrieved from "https://marvel.fandom.com/wiki/Jean_Grey_(Earth-101001)?oldid=5446759"
Community content is available under CC-BY-SA unless otherwise noted.