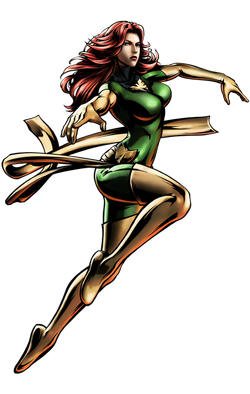 You better leave while I can still hold Dark Phoenix at bay.

Phoenix appeared at the last second where the villains (Doctor Doom, Super-Skrull, Dormammu, Magneto, and Galactus (whose shadow appears from the smoke) combine their powers and attack Ryu all at once. Phoenix saved him at the last second, using her telekinesis to block the attacks. She then used her Healing Field in a large form to restore the strength of all the other heroes, and flew forward with Phoenix Rage, facing the villains on her own.[1]

Seemingly those of the Jean Grey of Earth-616.

Seemingly those of the Jean Grey of Earth-616.

Like this? Let us know!
Retrieved from "https://marvel.fandom.com/wiki/Jean_Grey_(Earth-30847)?oldid=6058565"
Community content is available under CC-BY-SA unless otherwise noted.