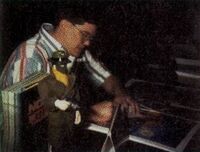 Born in Madison, Wisconsin, Jeff Butler grew up while playing sports and drawing.[6] When he became a comic-book fan in[6] Madison West High School[7], his father disapproved this hobby while his mother did not. Butler was captivated first by DC Comics, then moved to Marvel's, and drew superheroes during those years. At that time he was also the captain of the school's football team.[6]

Later, Butler became a fine arts major at the University of Wisconsin-Madison, also studying commercial art at the Madison Area Technical College[6] and played for the Wisconsing Badgers as a quarterback in 1977 until he retired after suffering several concussions.[7]

There he met Mike Baron, creator of the comic-book Nexus for the publisher Capital Comics.[6] Baron was interested in Butler's art after seeing one of Butler's posters, and actively pursued a collaboration with him.[7] They started working in a new comic-book, The Badger (1983), but Capital Comics had cash flow issues and they prematurely closed the series.[6]

By then, one of Butler's teachers at MATC told Butler about a job opportunity at TSR, Inc. in Lake Geneva, Wisconsin. Butler was hired in February 1984. In 1985, he married former cheerleader captain Laurel Layman, who had been his high school prom date.[6]

Butler left TSR in 1989[7] and worked as freelance illustrator and comic-book artist for nine years in different series.[8] In 1997, Butler and his family returned to Madison, where he joined Raven Software and worked in art for videogames as 2-D Art Lead and core team for different games.[9]

Butler began his professional career collaborating with Mike Baron[6] in 1982-83[10][11] as a pencil artist[10] in Nexus[10][11] for Capital Comics, then continuing with them for The Badger for 4 issues between 1983 and 1984,[11] when Capital Comics ceased its activity.[12] Its products, including Nexus and The Badger, were acquired, reprinted and continued by First Comics; Butler continued penciling and inking in The Badger and others, including American Flagg!, until 1989.[10]

This activity was simultaneous with Butler's work at TSR, Inc. from the moment TSR hired him in 1984.[6] At that point, TSR had started the publication of the Marvel Super Heroes Role-Playing Game and Butler worked mainly as a cover artist; he publicly declared he loved having an opportunity to professionally draw superheroes.[6] Butler worked mostly as cover artist, sometimes only as colorist for the covers and sometimes contributing with interior art, from 1983 to 1992. Some of his work included the covers in the eight issues of Gamer's Handbook of the Marvel Universe (1988-1992) and some interior art in #7; cover and interior art for the The Uncanny X-Men Special! Campaign Set (1990) and for the Marvel Super Heroes Advanced Set (1996); and work in several sagas of role-playing game adventures, including Secret Wars (1984) and Secret Wars II (1986), All This and World War II (1989), After Midnight (1990), Warlord of Baluur (1991). Butler also drew, along with Bruce Nesmith, the Adventure Fold-Up Figures (1984) used to represent the characters in three dimensions on the game's maps.

Butler also did the covers of the eight issues of Marvel Super Heroes Adventure Gamebooks (1986-1988), edited by Puffin Books. His Wolverine art for the cover of "Night of the Wolverine" (1986, by Jerry Epperson and James M. Ward) was later reused as the cover of TSR Inc.'s role-playing game adventure Mutating Mutants! (1990).

Leaving TSR in 1989,[7] Butler focused on his work as comic-book artist,[8] working for NOW Comics[10] in titles such as The Green Hornet (1992-93)[10][11] in a reimagining of the classical character that has been widely associated with Butler and his writer Baron. He also collaborated with NOW in other famous series like Mr. T and the T-Force (1994),[11] while working with other publisher like Go-Go Comics, where he penciled, inked and colored Creepsville (1991)[11] and Dark Horse with the one-shot Godzilla vs. Barkley, penciled by Butler.[10][11]

In 1995, Butler worked for Topps Comics in the limited series Jason vs. Leatherface, also penciling and inking The Legend of the Allegheny Traveler for The Rosenbaum Group, Inc.[11] Topps continued using Butler's work for series related to Jurassic Park (1996-97) and Hercules: The Legendary Journeys (1996-97)[10] also including Xena: Warrior Princess's comics.[11] For Image Comics, Butler worked in the series The Tenth, featuring his original character The Badger.[10]

Butler is currently an artist in active.[14]


Retrieved from "https://marvel.fandom.com/wiki/Jeff_Butler?oldid=4132219"
Community content is available under CC-BY-SA unless otherwise noted.