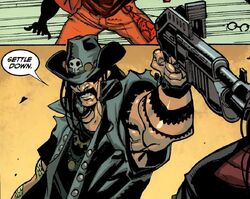 I ain't with anybody. Not anymore... I ride alone.

Jefferson Cole was the founder and leader of The Black Riders, an infamous 12 man biker gang operating on the streets of Texas near the border to South America. While the crew earned themselves a dangerous reputation, Cole was careful to prevent them from doing anything that would draw too much heat and attract the attention of the law - so while the gang became a known threat, they were never legally proven to be a criminal organization. The Riders were hired by an enigmatic business man who wanted them to bring him the superhero Tarantula, who had been extradited from San Diablo to the United States under the accusation of killing two people. The Black Riders quickly overtook the Texas Rangers escorting Tarantula and incapacitated the hero using non-lethal rounds, before engaging in a full scale fire fight with the Rangers, resulting in one of their deaths, as well as the death of one of the Riders. Cole, already upset at the heat that one Ranger death could bring down on them, ordered his men to spare the surviving ranger, despite his promise that he would come after them for vengeance.

Cole passed off Tarantula to their benefactor, receiving a briefcase of cash for their efforts, but the man's callous and distant behavior left Cole unnerved. The Rider pressed the man on whether they were operating in Tarantula's best interests as they had been lead to believe, and if they would be expecting more death and violence as a result of this job- something that their benefactor dismissed, mocking Cole for being a romantic at heart more than a hardened criminal, driving off with the hero. Immediately afterwards, the Riders discovered the money in the briefcase was counterfeit and used to disguise an explosive which promptly went off, wiping out the rest of the Black Riders as well as Delilah, Cole's girlfriend. With the rest of his gang gone, Cole decided that he would ride alone to hunt down the man responsible as The Black Rider. [1]

Cole was able to rough up enough people on the border to learn that the bomb was the work of a gang boss named Del Fuego, holed up in the El Gato Negro Roadhouse. The Black Rider drew Del Fuego out and attempted to interrogate information about their mutual benefactor out of him at gunpoint, but was interrupted by Two-Gun Kid who opened fire on the men. Del Fuego, The Black Rider and the Two-Gun Kid ended up outside in a standoff, but the child had the quicker reflexes- shooting Cole's shotgun out of his hands at the same time as he executed Del Fuego as revenge for his brother. While Cole was initially upset to lose his only lead, Two-Gun Kid quickly confirmed that he had picked up information on Del Fuego's boss while staking the crime-lord out and struck up a partnership with Black Rider to track them down. [2]

The Kid revealed that the Benefactor was known as Vance, and that he worked for Blackguard, a PMC organization with ties to Roxxon Energy. The Kid revealed that his brother worked in an abandoned Roxxon strip mine located in Sierra del Diablo, where he found something he believed would make the two of them rich, but put them in Roxxon's line of fire. They attempted to hire Tarantula to protect them, but she was unable to prevent Vance and his men from killing the Kid's brother, resulting in her killing the men in question and her extradition to the US. Now knowing his true enemy, The Black Rider took off alongside The Kid towards the Blackguard Compound, finding them in the middle of preparation to instigate another civil war to take control of the entirety of San Diablo. Cole and the Kid made short work of the guards outside, and split up, with the Kid heading into the compound itself in an attempt to confront Vance, while Cole reunited with Tex Dawson, the surviving Ranger, and formed an uneasy alliance to help bring down Blackguard. [3]

After dispatching one of the PMC's heavily armored APCs with a frag grenade, Cole spotted the Kid- injured from his narrow escape from his gunfight with Vance and his guards, and ordered Tex to cover him. While he was able to scoop the Kid up onto his motorcycle, another squad of Blackguard troops arrived and concentrated fire on his wheels, sending them flying. Before the Blackguard forces could take the pair prisoner, Tex Dawson plowed a hijacked APC into them, letting his new teammates inside and making a quick escape, driving through the perimeter fences and off the side of a cliff, escaping any pursuers. Crashed at the bottom of the river, the three shot their way out of the APC windows and struggled to swim to the surface. During the swim, Cole noticed Dawson lose his pistol and decided to catch the weapon and return it to him on the surface, hoping the gesture would square them away and show the Texas Ranger that they really were on the same side- a perspective Dawson reluctantly admitted to coming around on, asking the Rider to fill him in on the details they had uncovered so he could decided if he wanted to shoot the man or deputize him. [4]

Cole, Dawson and the Kid crossed paths with Tarantula and an American bounty hunter, Matt Slade outside the mine and decided to join forces. During the meeting, Dawson revealed that when he and the Texas Rangers had investigated the final site of the Black Riders Motorcycle Club he had found a charred cross necklace, and offered it to Cole. Cole recognized the necklace as the one once worn by his girlfriend, Delilah, and accepted it, wearing it over the rest of his biker gear in tribute to the people he lost, and burying the hatchet between himself and the Texas Ranger once and for all.

The group quickly thereafter discovered that Blackguard was being reinforced by the PMC controlling the other half of San Diablo, Kane-Meyer and the entire civil war was being orchestrated by the same company. Both Blackguard and Kane-Meyer forces converged on the team's position, forcing them to take cover deep in the mine. While hiding out in the mines, Two-Gun Kid discovered that the "Vibranium" deposit was actually Iron Pyrite; Fool's Gold. In actuality, Roxxon was using a false Vibranium mining operation to scam the International Monetary Fund for billions of dollars in loans. Before the Roxxon PMC army could swarm the tunnels, the team used the last of the mining explosives to set up booby traps, and escaped to the surface using the single elevator in the mine's depths. As Roxxon pushed in, they detonated the explosives, causing the river to breach the mine and wipe out the invasion force. The group hijacked one Blackguard's helicopters and intercepted Vance at the First National Bank at Santa Maria before he could cash out, executing the man and putting a final end to Roxxon's plan for San Diablo. [5]

Like this? Let us know!
Retrieved from "https://marvel.fandom.com/wiki/Jefferson_Cole_(Earth-616)?oldid=6409482"
Community content is available under CC-BY-SA unless otherwise noted.