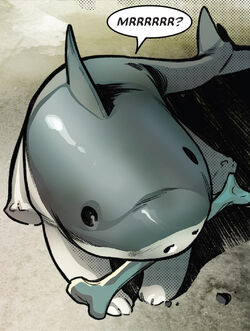 Jeff was a Land Shark adopted by Gwenpool during her time on the West Coast Avengers.[4]

After an incident left several, including Jeff, briefly de-aged,[5] he ended up with Elsa Bloodstone, who promised to always take care of him;[6] however, Gwen transported Jeff to Gwenpool's Island, where he stayed in her viewing box with her friends instead of being forced to fight. He then watched as Gwenpool fought and defeated the Hulk.[7]

Gwen then decided to leave Jeff with Deadpool after she had doubts that she would have a solo series again, causing her to be worried about his future.[8]

Like this? Let us know!
Retrieved from "https://marvel.fandom.com/wiki/Jeffrey_(Land_Shark)_(Earth-616)?oldid=6462091"
Community content is available under CC-BY-SA unless otherwise noted.