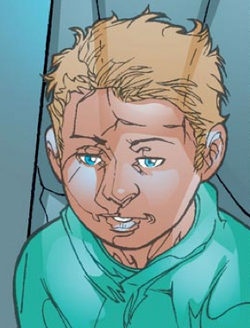 The mutant teleporter Jeffrey Garrett and his siblings were the prisoners of Elias Bogan at his lodge in Alaska. When Bogan had Jeffrey’s family killed, the young boy escaped and teleported Bogan's associates to a glacier, which resulted in them freezing to death.[citation needed]

Wanted for murder, Jeffrey Garrett sought asylum at the Xavier Institute and was looked after by Emma Frost. Bogan followed Garrett to the school and used him to take him, his schoolmates, Emma Frost, Sage, and Bishop as hostages. Jeffrey managed to save himself and his newfound friends (Gloom, Zach, Rubber Maid, Silicon and Tantra) by teleporting them away. After this incident, Garrett and the other students somehow lost all recollection of the event.[citation needed]

Jeffrey was present when Xorn attacked the school posing as Magneto. Dani Moonstar tried to get him to leave the school, but instead of following orders he returned to his room to retrieve a picture of his deceased family. The school blew up just as Jeffrey began to teleport away, which ultimately killed him but left his spirit behind. As Garrett's body wasn't retrieved, and given the fact that Cerebra was able to detect a hazy signature of him (without locating him) it was assumed by the Faculty that he made it out.[1]

Believing Xavier's to not be safe, Jeffrey briefly terrorized the new students at Xavier's[2] in an effort to get them to leave the school.[1] He eventually appeared to Kim, Prodigy's little sister,[2] who was believed to have mutant powers and enhanced the belief of a ghost within the students.[3] The New Mutants Squad and Dani Moonstar inquired on the case separately,[3] then united and summoned Jeffrey at a reunion where his point of view was torn apart, and he stopped his haunting.[1]

Surge developed some affection toward Jeffrey, who was placed in Karma's lower class. Because Jeffrey was technically dead he could never grow up, but he could mature and perhaps one day join a squad.[1]

After M-Day, Jeffrey lost his powers and now was completely dead.[4]

Unable to move things in the physical world, except through the use of teleportation.

Like this? Let us know!
Retrieved from "https://marvel.fandom.com/wiki/Jeffrey_Garrett_(Earth-616)?oldid=6076194"
Community content is available under CC-BY-SA unless otherwise noted.