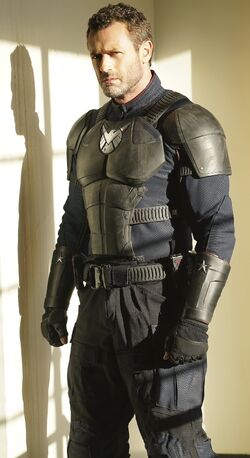 Jeffrey Mace was the Director of S.H.I.E.L.D. The main focus of his early tenure was to prepare S.H.I.E.L.D. to once again become a legitimate organization.[1]

Jeffrey Mace was present at the United Nations meeting in Vienna to discuss the Sokovia Accords. While trying to get to safety during the attack on the U.N., Mace tripped and accidentally pushed a woman to safety. A photographer took a picture of this apparently heroic act. Mace was regarded as an American hero, and his attempts to deflect this praise were seen as simple modesty. However, he liked that people were treating him like the person he always wanted to be, and decided to play along with the narrative of his heroics in Vienna.[2][3]

Mace was eventually approached by Brigadier General Glenn Talbot to be S.H.I.E.L.D.'s new director. The organization operated from the shadows since its fall two years earlier, and was soon to be re-legitimized. The outgoing director, Phil Coulson, recommended an enhanced person replace him to rebuild the public's trust in them following Captain America's rejection of the Sokovia Accords. Talbot could find no suitable enhanced person to replace Coulson, so he decided to make one out of Mace. Known as "Project Patriot", Talbot used a modified formula recovered from Cal Zabo to effectively turn Mace into another super-soldier with enhanced strength and durability as long as he received a regular dose. They would pretend he was an Inhuman to explain the origin of his abilities. Mace saw this as an opportunity to be the face to end prejudice against Inhumans and agreed to Talbot's plan.[3]

As Director of S.H.I.E.L.D., Director Mace's first major goal was to prepare the organization to come out of the shadows as a legitimate organization. One of his initiatives was to reign in the Inhuman vigilante Quake, who was herself a former agent of S.H.I.E.L.D. who served under Director Coulson. Another was to institute a rigorous vetting process and reorganize S.H.I.E.L.D.'s hierarchy to prevent another organization like Hydra from ever taking root within the organization again. Jemma Simmons, a science officer, was named as the highest-ranking agent under Mace. Another agent, Burrows, was entrusted with the truth behind Mace's abilities and would regularly administer the Project Patriot formula.[4][1][3]

One of the director's first political opponents was the anti-Inhuman senator Ellen Nadeer. Senator Nadeer was secretly allied with the Watchdogs, an extremist group responsible for attacks against Inhumans all over the world. Director Mace and Senator Nadeer publicly butted heads over Inhuman rights, eventually leading to Mace revealing himself as an Inhuman during a televised debate. However, while Mace was busy dealing with politics, Coulson, now a field agent, had begun working with Quake in his hunt for the Darkhold and Lucy Bauer. To make matters worse, he had also enlisted the help of the Ghost Rider, a bloodthirsty vigilante who left a trail of bodies all over Los Angeles. Senator Nadeer got her hands on footage of Coulson working with Quake and of the Ghost Rider murdering an innocent man while on a mission for S.H.I.E.L.D.[2]

His hands tied, Director Mace was forced to give into Senator Nadeer's demands or else she would leak this footage to the press. All she asked was to borrow Simmons to observe an Inhuman whose identity was kept a secret to everyone but the senator. While Simmons was busy with Nadeer's task, Mace took it upon himself to rein in Coulson and apprehend Quake and the Ghost Rider. Coulson tried to hide the vigilantes from the Director, but Mace easily saw through his ruse. Mace watched in horror as Robbie Reyes transformed into the Ghost Rider, his vicious alter ego, and punched his way out of the supposedly inescapable containment unit. Mace tried to defend his agents from the Ghost Rider, but was easily overpowered. Mace might have died if Robbie's brother Gabe was not there to bring his brother back to his senses.[5]

Coulson convinced Director Mace to let him continue his search for Lucy Bauer. While they were busy with her, however, Robbie and Gabe's uncle Eli Morrow used the Darkhold to give himself the ability to spontaneously generate matter. Morrow not only quickly used these abilities to kill several S.H.I.E.L.D. agents, but he had also attempted to take the lives of Coulson, Robbie, and Leo Fitz just to obtain them.[6] Director Mace gave Coulson permission to assemble a strike team consisting of Quake, Ghost Rider, and Elena "Yo-Yo" Rodriguez (another Inhuman) to assault the abandoned building in Los Angeles where Morrow barricaded himself as long as the former two agreed to stay out of view of the press. The initial assault failed, but S.H.I.E.L.D. discovered Morrow had built a "demon core," an unstable mass that could destroy half the city if it was activated. Furthermore, Fitz realized that Morrow's abilities were powered by another dimension, and that the use of his powers were causing tremors. With time running out, Director Mace decided to personally get involved. He put on his personal combat armor and joined his agents in the next assault on Morrow's position. This assault was a success, and Morrow, the demon core, and the Ghost Rider were all pulled through a portal to another dimension opened by the LMD Aida.[7]

Quake was seen by the media following the mission. Rather than risk S.H.I.E.L.D. losing face from being caught working with a wanted vigilante, Mace took the opportunity to clear her name. The Director invented the story that Quake was an undercover S.H.I.E.L.D. agent all along conducting operations against the Watchdogs. Shortly thereafter, Mace officially reinstated Quake as an agent of S.H.I.E.L.D.[7] For her first mission, she, Simmons, and Director Mace would rescue the Inhuman held against his will by Senator Nadeer. Simmons had already deduced that the Inhuman she treated was none other than the senator's brother Vijay. They pinpointed the location of both the senator and her brother at their family estate. When they arrived, Senator Nadeer refused to hand her brother over to Mace; however, Watchdog assassins the senator hired to kill Vijay and then called off received new orders to kill him regardless of what Senator Nadeer told them. Director Mace and his agents tried to convince Vijay to come with them, but he instead chose to leave with his sister.[8]

Senator Nadeer and the Watchdogs soon hired a cell of ex-Hydra operatives to assassinate Director Mace and confiscate his briefcase. Unknown to them, the briefcase contained the Project Patriot formula that gave Mace his enhanced strength and durability. A sniper tried to assassinate Mace at a press event in Pennsylvania. When the situation became too chaotic, agents Coulson and Mackenzie grabbed Director Mace and Burrows and brought them to a quinjet to take them to a secure location. The quinjet was shot down mid-flight. Burrows and the briefcase containing the formula were sucked out of the plane. When they crash-landed, Mace immediately took to finding Burrows' corpse and the briefcase still handcuffed to his wrist. The attempt on his life could not have come at a worse time, as the director was coming down off his most recent dosage, meaning he was without his enhanced abilities. More ex-Hydra thugs hired by the Watchdogs found Burrows' corpse first. Mace tried to hide his condition from Coulson and Mack, but was forced to reveal the truth behind his abilities when he was unable to take down even one of the assassins.[3]

Once they were rescued and taken back the The Playground, Mace told Coulson the truth about what happened in Vienna and his plans to resign and re-instate him as director. Coulson told him not to - to continue being the official director and playing the part of the hero for the public. When it came to operations, however, Coulson would call the shots from then on.[3]

The effects of the Project Patriot formula are temporary. Without a regular dose, Mace will return to his normal level of strength.

Like this? Let us know!
Retrieved from "https://marvel.fandom.com/wiki/Jeffrey_Mace_(Earth-199999)?oldid=6074476"
Community content is available under CC-BY-SA unless otherwise noted.