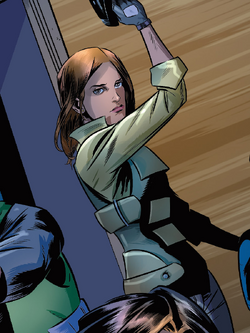 Daughter of a high level Roxxon executive,[1] Jemma Simmons was one of the S.H.I.E.L.D. field agents who formed part of Phil Coulson's team to investigate how the terrorist Abu Mussan got hold of an Uru sword. Along with Melinda May, Simmons helped Heimdall (the owner of the Uru sword) break free from Mussan's terrorist group. After Heimdall was dispossessed from the influence of an alien rock, Simmons recovered fragments of said rock to investigate on the Helicarrier.[3]

One day in a field mission, Simmons was supposed to neutralize a DNA Bomb that had been constructed by a rogue A.I.M. faction. While she tried to do so, she was attacked and came in contact with the dangerous material,[4] which infected her with some kind of cellular necrosis.[5] After doing some medical checks, she predicted herself to have only one month left to live.[4]

During the attack of the New Avengers on S.H.I.E.L.D., Power Man disrupted her chi and was surprised to sense that Jemma's chi was "a mess". He told Deathlok to talk to her about it.[6] When Deathlok confronted Jemma about it, she revealed that she had failed to find a treatment, and didn't want anybody to pity her as she approached her final days.[7]

Jemma's health eventually deteriorated and she slip into a coma, which allowed her superiors to learn of her malady.[8] Mockingbird and Deathlok began to analyse her condition, and he determined the only way to reverse her illness would be to turn her into a Deathlok.[5] The procedure was a success and the cellular degradation was completely reversed. However, Jemma didn't wake up, forcing Deathlok to use experimental neuro-somatic stimulation to properly restore her. Simmons awoke disoriented and confused, and began to attack fellow S.H.I.E.L.D. agents. Coulson intercepted her and appealed to her humanity to bring her back to her senses. She later thanked Deathlok for saving her life.[2]

Cyborg Physiology: In order to reverse the effects of a lethal infection that degenerated the cells of Simmons' body, Henry Hayes saw himself forced to turn her into a Deathlok like him.[2] She has gained certain abilities like:

Like this? Let us know!
Retrieved from "https://marvel.fandom.com/wiki/Jemma_Simmons_(Earth-616)?oldid=5736812"
Community content is available under CC-BY-SA unless otherwise noted.