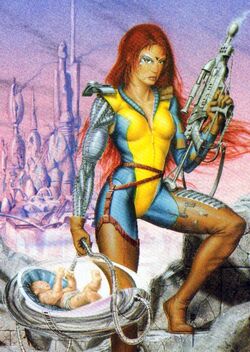 The Askani beliefs taught such tenets as "what is, is", that fate must be embraced, and "thanks for today, please for tomorrow", a belief that the past brings hope, and preached that the "Sacred Timeline" should be preserved and nurtured through careful time travel. Part of the Askani intense discipline and training was mediation performed while levitation upside down. The Askani had a ceremonial language, unique martial arts, and the Psimitar, a weapon that focuses psionic energy. Believers deified the ancient X-Men: "the Xavier" became a father figure, the Bright Lady a mother goddess, and the prophesied "Dayspring" or "Askani'son" their messiah. The Askani also believed in tiny winged Wysps that carried prayers and feared the monstrous Daegon, that hunted the weak in the Apocalypse's name. The Askani took, as their symbols, the Phoenix and the scarred eye, reminiscent of the scars around the Askani'son's right eye.[3][4]

Eventually, Mother Askani decided to fulfill the Askani'son prophecy, to "protect the child born on the day of spring"; she and the synthcon Boak sent Sister Askani, who sacrificed her physical body to become energy and tasked with preservation of the Askani'son, to the past and codenamed her "Preservation". Sister Askani arrived just as the Riders of the Storm kidnapped the Askani'son, Nathan Summers. After X-Factor rescued the infant Nathan, if was learned that Apocalypse infected the infant with a Techno-Organic Virus. Sister Askani presented herself and stated her mission to save the child. Nathan's father, X-Factor's leader Cyclops, reluctantly allowed Askani to take Nathan forward to her time, to cure the virus. She did so at the cost of her life. [5]

Like this? Let us know!
Retrieved from "https://marvel.fandom.com/wiki/Jen_Askani_(Earth-4935)?oldid=5761892"
Community content is available under CC-BY-SA unless otherwise noted.