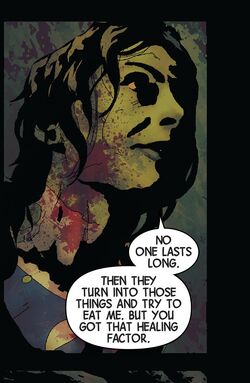 A recently exiled She-Hulk was encountered by Logan after he was exiled to the Deadlands for venturing beyond the Wastelands. She was later attacked by Sauron after she hurled Logan over The Shield all the way into the Kingdom of Manhattan.[1]

Seemingly those of the Jennifer Walters of Earth-616.

Like this? Let us know!
Retrieved from "https://marvel.fandom.com/wiki/Jennifer_Walters_(Earth-15513)?oldid=5671412"
Community content is available under CC-BY-SA unless otherwise noted.