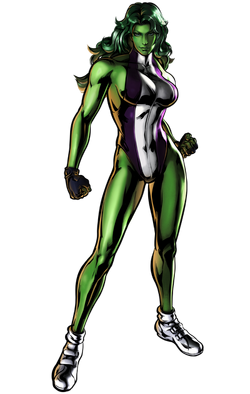 At some point during Thanos' attempt to seize the Infinity Gems, She-Hulk attempted to fight him, but was defeated and turned to stone. She was restored when Thanos had been defeated.[1]

Much later, she helped fight Galactus when he attempted to consume the two merging worlds.[2]

After Galatus' defeat, she became the judge of her own court TV show called "Jen's Justice," with both Phoenix Wright and Miles Edgeworth as defendant and prosecutor respectively. Before she delivers her verdict, she accidentally smashes the judge's stand with a slight tap of the gavel, leaving both lawyers panicking and hugging each other out of fear with She-Hulk telling the Bailiff that she "did it again."[2]

Seemingly those of Jennifer Walters (Earth-616)#Powers.

Seemingly those of Jennifer Walters (Earth-616)#Abilities.

Like this? Let us know!
Retrieved from "https://marvel.fandom.com/wiki/Jennifer_Walters_(Earth-30847)?oldid=6403816"
Community content is available under CC-BY-SA unless otherwise noted.