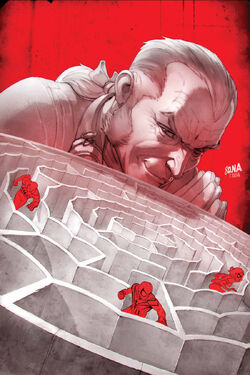 It's a mystery. A puzzle. A question to be answered. The Weaver has told me my studies will never unravel its hidden secret. I take that as a challenge.

Jennix was one of the members of the family of Inheritors. Unlike his relatives, Jennix spent most of his time working on his experiments (housed in Earth-802). Jennix also provided his family with the cloned bodies where they transferred their consciousness if they ever died. As part of his "special projects," Jennix attempted to clone numerous Spider-Men from across the Multiverse, in an attempt to create a livestock of spider-totems to consume. However, his experiments had failed because he wasn't able to clone the essence of the spider, what the Inheritors feasted on, into the cloned body.[1] Jennix also created the chains that control the power of the Master Weaver.[2]

When the Inheritors managed to gather three spider-totems needed to perform a ritual, The Other, The Scion, and The Bride, the Spider-Army formed to oppose the Inheritors travelled to their base, Loomworld, to stop them.[3]

In the end, the Spider-Army managed to overpower the Inheritors and stop the ritual which would've ended them all. The Inheritors were left in Earth-3145, a universe with a radioactive Earth, where they would die due to them being extremely vulnerable to radiation, and couldn't escape, because the Master Weaver they had enslaved and used to travel across the Multiverse had been killed. However, Spider-Man gave them the knowledge of a shelter in Sims Tower, where they could survive, but not pose a threat anymore.[4]

Jennix possesses a variety of superhuman attributes as a result of his unique physiology.


Life Force Energy Absorption: Jennix' primary power is the ability to absorb the life force energy of other living creatures, thereby granting himself superhuman physical abilities. Even though Jennix can absorb the energies of virtually any being, he must occasionally renew himself by feeding upon pure forms of animal-related superbeings from one of the four categories that make up his own, unusually pure, DNA such as animal, insect, human, and bird. Once Jennix has touched a human, he is able to sense that person's life force across great distances.

Radiation: Jennix and the Inheritors are extremely sensitive to radiation.[5]

Like this? Let us know!
Retrieved from "https://marvel.fandom.com/wiki/Jennix_(Earth-001)?oldid=5245903"
Community content is available under CC-BY-SA unless otherwise noted.