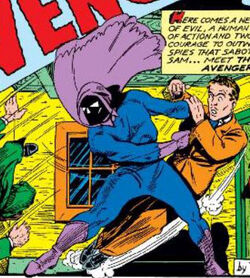 Frustrated by the apparent inaction of America against crimes and/or Nazi saboteurs, ham radio operator Jerry Carstairs developed his own solution. Creating a costume with a built-in speaker system loud enough to shock and deafen any one crossing his path; he stepped out and began fighting injustice as the Thunderer.

In his first recorded appearance, Carstairs learned that radio station WWLX was really a front for Nazi Fifth Columnists who were transmitting secret messages hidden in music. Learning that they were targeting his girlfriend Eileen Conroy, a newspaper reporter, Carstairs foiled their operation as the Thunderer. In order to protect his secret identity, Carstairs acted like a meek weakling while in his civilian guise.[2]

In another adventure, Carstairs uncovered the machinations of the hideously deformed dwarf named Gore who hated beautiful people so much that he rigged Morse Code death traps that killed his victims over the radio. The Thunderer smashed up his operation, and Gore was killed in a house fire that broke out due to faulty wiring in his equipment.[3]

Carstairs's activities were far and few between, likely due to the limitations his position with the FCC provided in giving him leads to criminal or spy activities. During this period, he reinvented his costumed identity and began calling himself the Black Avenger. In the fall of 1942, the FBI caught a Nazi spy that resembled Carstairs and convinced him to go undercover to try and expose the spy ring that was sending defense secrets back to Nazi Germany. As the Black Avenger, Carstairs managed to round up the Nazis including their leader Kurt Weidner and turning him over to justice.[4]

In 1943, the Black Avenger was among a number of heroes who were slain by the Cosmic Cube wielding Red Skull and impaled on a massive wall.[5]

However, the Cube was recovered by Private Paul Anselm who resurrected all the slain heroes who aided the combined efforts of the Invaders and the time displaced New Avengers and Mighty Avengers. When the Skull was defeated, the heroes used the Cube to wipe out the Black Avenger's memories of the event to preserve history.[6]

Carstairs was later seen as a resident of Valhalla Villas, a retirement home for ex-heroes and ex-villains located in Miami. He was among the residents that were temporarily de-aged by Mary Morganstern, who used an unnamed Asgardian relic during the Incursion between Earth-616 and Earth-1610.[7]

The Thunderer is a good hand-to-hand combatant

Due to a combination of mike and horn set around his neck, he can amplify his voice, making it sound like a thunder.[2]

He carries a "lightning gun" in his belt, which emits a bolt of light, capable of temporary blinding his enemies.[2]

Oddly enough, his costume colors in the actual stories were the exact opposite to the way they appear on his cover appearances with him having a red costume and hood and a blue cape. He has a dog called Mike.

Changed his name to the Black Avenger for his last Golden Age appearance in "All Winners Comics #6" (Timely Comics, Fall 1942).

Like this? Let us know!
Retrieved from "https://marvel.fandom.com/wiki/Jerry_Carstairs_(Earth-616)?oldid=5688960"
Community content is available under CC-BY-SA unless otherwise noted.