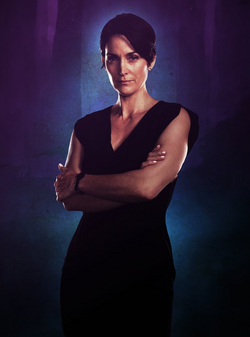 You should be very afraid of the woman who has absolutely nothing left to lose.

Jeryn "Jeri" Hogarth is a lawyer who is part of the Hogarth, Chao and Benowitz partnership. She was married to Wendy Ross-Hogarth.

Hogarth had tried to get Jessica Jones take a job as the resident investigator at her firm, but Jessica said that she prefered to freelance. Hogarth then hired Jessica to investigate a case about a brain damaged pole dancer. Hogarth later berated Jessica about her aggressive tactics in finding the information she needed. Hogarth refused to give Jessica her payment for the case early so that Jessica can fly to Hong Kong. Jeri had an affair with her secretary, Pam.[1]

Hogarth thought that Hope Shlottman was guilty because she didn't believe that Kilgrave existed or had powers, but Jessica convinced her to take the case anyway. Pam told Jeri that Wendy had found out about their affair and Jeri and Wendy's marriage started to fall apart.[2]

Dr. David Karata told Hogarth over the phone about the surgery he was forced to perform on Kilgrave. Hogarth talked to Hope and found out her point of view on the murder of Hope's parents.[2] Hogarth wanted Jessica to testify about her experience with Kilgrave, but Jessica didn't want to testify. Instead, they found a group of people who claimed to have been controlled by Kilgrave through which Jessica weeded to find the legitimate cases. After compiling a list of victims, Jessica and Hogarth set up a support group for them to talk about their experiences.[3]

Hogarth confirmed for Jessica that Audrey Eastman was one of her firm's clients. Jeri and Pam tried to go out for lunch but Wendy was leaving the restaurant when they arrived. Wendy revealed that it was the restaurant where Jeri had proposed, and suddenly Pam didn't want to eat there anymore. Hogarth frustrates Jessica when she says that if Kilgrave was on their side he would be able to do a lot of good.[4]

Hogarth called Jessica to tell her that Hope had been attacked. Hogarth bribed a prison guard for details about the attack and found out that a woman named Garcia was responsible, although Hogarth thought she had been Kilgraved. Jeri proposed to Pam and told her that she wanted to spend the rest of her life with her, but Pam wanted her to finalize her divorce first. After Hope took an abortion pill, Jessica told Hogarth that she would ensure that Wendy signed her divorce powers if Hogarth stayed with Hope during her abortion. Hogarth told a nurse in the hospital to collect the remains of the dead fetus and send it to her office, because she thought that the fetus might have had whatever genes gave Kilgrave his powers and she wanted to try to replicate them. [5]

Later, Jessica stopped Hogarth as she was entering the courthouse and demanded that she be her lawyer if she was to convince Wendy to sign the divorce papers. Hogarth sent Pam inside to set up for the case and Jessica asked what it would take for her to be locked up in Supermax prison. She asked Jessica what she was planning to do but Jessica said that she had already done it. Wendy dropped the divorce papers off at Jeri's office but wanted 75% of Jeri's assets. She threatened to reveal that Jeri had bribed the jury on her first ever case and that Jessica had been overly violent when convincing her to sign the papers. After Wendy leaves, Pam is angry because Wendy still knows more of Jeri's secrets than she does. Hogarth defended Jessica when she was arrested, but Jessica doesn't want to be defended: she wants to go to Supermax. Jessica becomes angry with Hogarth while they are still in the interrogation room and fires her and says she will be representing herself.[6]

Wendy returned to Jeri's office, continuing her plea for a majority of her assets. Pam interrupted them and told Jeri that she had a text saying that Jessica is with Kilgrave. Hogarth texted Jessica demanding incriminating information about Wendy. Unbeknownst to her, Kilgrave had Jessica's phone, and he responds.[7]

Like this? Let us know!
Retrieved from "https://marvel.fandom.com/wiki/Jeryn_Hogarth_(Earth-199999)?oldid=5047905"
Community content is available under CC-BY-SA unless otherwise noted.