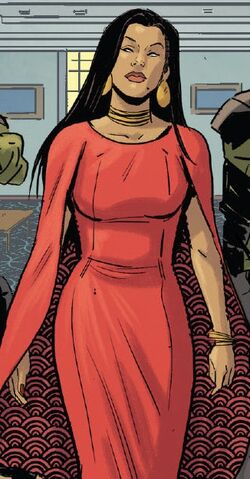 Then it appears you butchers have made all this effort -- caused all this carnage -- for nothing.

Jessán Hoan, alias Tyger Tiger worked at her family's bank, Hoan International Bank, when the Reavers robbed the bank. The Reavers kidnapped Jessán and killed several members of her family at the bank. While Jessán was a prisoner at the Reavers' Australian base, Pretty Boy tried to alter Jessán's mind, so that she would join their criminal band as a financial expert. The X-Men interrupted the process, freed Jessán, and defeated the Reavers. After a lengthy debate, the X-Men released Jessán and the supernatural being, Roma, teleported Jessán back to her family's bank.[2]

Jessán was ostracized by her family because she mysteriously survived the attack that killed several other members of the Hoan family. In addition, Jessán found that she had lost some of her inhibitions, as a result of the partial brainwashing by Pretty Boy. Jessán discovered that the Reavers had been hired to attack Hoan International Bank by Roche, the crime lord of Madripoor.[3]

Hoan moved to the island of Madripoor, where she became embroiled with the criminal element and adopted the alias Tyger Tiger. After finding Dave Chapel in the desert tortured and dying from exposure, Wolverine returned to Madripoor, while searching for "the Tiger". While at the Princess Bar, Wolverine realized that he was being watched and confronted the woman, who turned-out to be Jessán. After a brief battle with Jessán, Wolverine was beaten by Sapphire Styx and Razor-Fist and delivered to Roche. After surviving torture from Inquisitor, Wolverine escaped and was rescued, from a harbor, and looked after by Jessán.[4]

After healing, Wolverine began wearing an eye patch, to keep the resurrection of the X-Men a secret, and learned that Jessán was in-fact Tyger Tiger and vowed to aid her in overthrowing Roche and taking his place as the Madripoor crime lord. After defeating Razor-Fist, Tyger Tiger and Wolverine rescued O'Donnell, killed Roche (decapitating him), and Wolverine declared that he would become Tyger's conscience to remind her that if she became like Roche, he would come for her. After declaring that he was to be called Patch while in Madripoor, Tyger responded that he had won her heart and the two kissed.[5]

As Tyger Tiger, Jessan became the new crime lord of Madripoor, but because she still retained most of her morality, she refused to deal in either drugs or slavery. For a time, she briefly wore a highly resistant suit of armor that later came into the possession of the X-Man Psylocke. The first major challenge to her empire was General Nguyen Ngoc Coy. After informing Tyger that he would not assassinate or kidnap for her, Tyger and Patch were beaten, by Roughouse and Bloodscream. Prince Baran eventually interceded on the war of the crime lords. General Coy would run drugs and slavery in Madripoor, while Tyger Tiger dealt with the rest.[6] Years later, Tiger killed Coy and became sole crime lord of the island.[7]

Later, when Tony Stark managed to overthrow Madame Hydra's government of the region, control was given to Tyger Tiger, who turned into a Robin Hood-esque figure.[8]

She also briefly lost control to Daken, who took control of the island and put her up as a useful figurehead. Tyger teamed up with X-23 and Gambit to help the former investigate Malcolm Colcord's activities on the island, in the processes helping to destabilize Daken's hold on Madripoor's criminal element.[9]

Jessán's hold on the Madripoor criminal underworld remained tenuous, however, as her desire to clean up the island and put an end to the slave, drug, and arms trades brought her into conflict with Kimura, who desired to seize control for herself. To settle the gang war, Kimura captured Laura, now Wolverine herself, intending to turn her loose against her after previous a assassination attempt infected Tyger Tiger's blood with the trigger scent. The attempt was thwarted through the combined efforts of Gambit, Gabby, and a Life-Model Decoy.[10]

Pressured by S.H.I.E.L.D. over the warrant for Laura's arrest for the Daylesville Massacre, Jessán betrayed her to Nick Fury to avoid an international incident. However Kimura's forces tracked them to the bunker where Laura was being sheltered, and threatened to bring down the entire mountain unless the two women surrendered to her. Jessán's control of the island was secured in the battle that followed, when Kimura's forces were defeated by Gambit, Gabby, Fury, Jean Grey, and Angel, and Kimura herself was drowned in Madripoor's bay by Laura.[11]

Tyger Tyger is a highly formidable hand-to-hand combatant and has a great skill with firearms and knives. A talented financial executive, Tyger is also a skilled negotiator and cunning strategist making her a fearsome business rival.

Jessa Hoan has the strength of a normal human female who engages in an extensive exercise regimen.

Like this? Let us know!
Retrieved from "https://marvel.fandom.com/wiki/Jessán_Hoan_(Earth-616)?oldid=5774894"
Community content is available under CC-BY-SA unless otherwise noted.