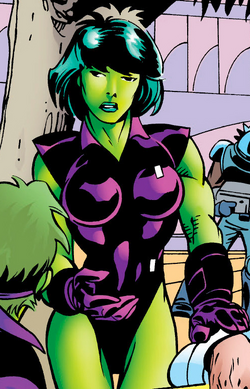 Jess Harrison was given her powers by the Leader and served as a member of his Riot Squad at the Freehold.[1] She died under unrevealed circumstances after her boyfriend Hotshot was forced to restrain her when her powers went out of control when the One Below All possessed her body.[2][3]

Like this? Let us know!
Retrieved from "https://marvel.fandom.com/wiki/Jess_Harrison_(Earth-616)?oldid=5755402"
Community content is available under CC-BY-SA unless otherwise noted.