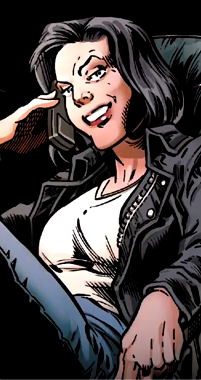 Jessica Jones was a private investigator who was hired by Peter Parker to find the whereabouts of Norman Osborn. She was also Peter Parker's lover by the year 1995 during the period when he was still separated from his family.[1]

Jessica's final fate is unknown, save that she was among the heroes who were "dead or missing" by 2019 following Doctor Doom's takeover.[2]

Seemingly those of the Jessica Jones of Earth-616.

Like this? Let us know!
Retrieved from "https://marvel.fandom.com/wiki/Jessica_Jones_(Earth-19529)?oldid=5372722"
Community content is available under CC-BY-SA unless otherwise noted.