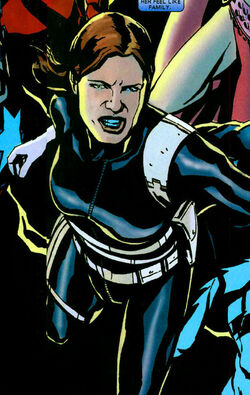 As the superhero Jewel, Jessica Jones was hypnotized by the Purple Man. After eight months under his hypnosis, he sent her to attack Daredevil. In her hazy mental state she went to Avengers Mansion instead and attacked the similarly dressed Scarlet Witch. After the vicious return attack of the Avengers, Jessica was hospitalized and comatose. Jean Grey helped her regain her mind and when she awoke, she was surrounded by the Avengers, Nick Fury and Jean. Nick Fury offered her a job with S.H.I.E.L.D. as their liason to the Avengers. Slightly dazed, Jessica accepted Fury's offer and soon joined the Avengers as a member.

Jessica aided the team on numerous missions. During a mission against the Squadron Supreme, Jessica saved Captain America and a romance began to blossom between the two. Not long after the Squadron Supreme mission, Jessica was wandering the Avengers Mansion looking for the others when she came across the Scarlet Witch's room. Noticing that the Scarlet Witch was acting strangely and thinking that she heard voices in her room, she informed Captain America. The team soon confronted the Scarlet Witch, who admitted that she felt her sanity slipping. Captain America then explained to Jessica what was happening and the two shared a kiss and were soon wed.

Seemingly those of Jessica Jones (Earth-616)#Powers

Like this? Let us know!
Retrieved from "https://marvel.fandom.com/wiki/Jessica_Jones_(Earth-523002)?oldid=6471081"
Community content is available under CC-BY-SA unless otherwise noted.