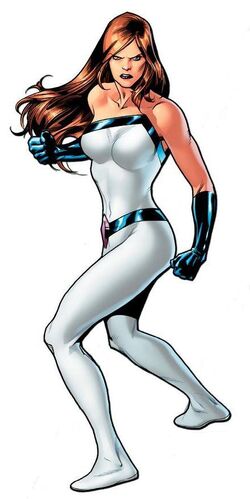 Jessica Jones used a costume to become a superhero.

The Jewel costume was primarily white with blue details, along with a enormous pink gem on the right side of the waist and matching pink, diamond-shaped earrings. Blue gloves completed the outfit.

In Earth-199999 only, the costume also had a matching blue mask with a gem between the eyes.

After taking on the Knightress codename, Jessica Jones obtained a new suit to go with it. The body of the suit is mainly black on the sides, with red on both the front and back in the center, while fully black on the legs. Matching red gloves and boots compliment the outfit, and a red sash is tied on the left side of the waist by a gold medallion. A red mask finishes the look.

Like this? Let us know!
Retrieved from "https://marvel.fandom.com/wiki/Jewel%27s_Suit?oldid=6436570"
Community content is available under CC-BY-SA unless otherwise noted.