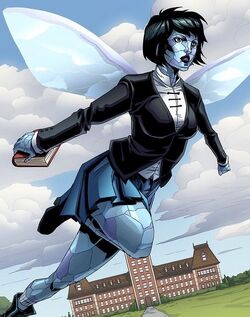 When Cyclops became the Dark Phoenix and began destroying the Earth, Jia Jing was on a bus ride in Beijing, China.

As that bus drove off a bridge, Spider-Man prevented it from falling by restraining it using his web, and swooped in to rescue the occupants.

At the same time, the Phoenix was dispersed by Hope Summers and the Scarlet Witch; Jia's powers manifested while under Spider-Man's protection.[1]

She quickly enrolled in the Jean Grey School for Higher Learning,[2] wanting to became "the greatest X-Man who has ever lived", to honor the pride of her family and country.[3]

On the way to the Savage Land,[4] Wolverine gave her the code-name "Sprite", as a tribute to Logan's "favourite X-Man", and told her to learn about this name.[3]

Like countless other mutants, she joined the mutant-only nation of Krakoa.[5]

Jia is a new mutant activated after the Phoenix dispersion,[1] and has displayed the following mutant powers:

Fairy-Insectoid Physiology: Jia Jing has rocky blue skin and fairy-insectoid wings which enable her to fly.[1]

Flight under her own power.

Like this? Let us know!
Retrieved from "https://marvel.fandom.com/wiki/Jia_Jing_(Earth-616)?oldid=6002214"
Community content is available under CC-BY-SA unless otherwise noted.