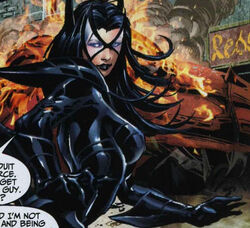 Woods' father abandoned his family. As soon as she could, Woods left home and became a student at the University of San Francisco. Her interest in the occult drew her to a lecture by Doctor Druid, after which she felt compelled to approach him. Druid soon learned that her attraction was a holdover from a past life in King Arthur's time, when Druid was a princess and Woods an alchemist. The two soon became lovers, as well as mentor and student. During an assay of mystic items, Woods accidentally released a demon, which slew her. Druid used a statue called the "Bride of Slorioth" to resurrect her, but the process left her linked to the Darkforce. To avoid causing anxiety (and possibly to assuage his own guilt), Druid told her that the demon had caused her new powers and not that she had died.[2]

When Druid formed the Shock Troop, Woods joined the team as Shadowoman, along with the Living Mummy and Skull the Slayer. On their first mission, they and Quasar encountered an Anti-Body from the New Universe (Earth-148611). It split into several smaller Anti-Bodies. Woods drew them into her shadow self and forced them to recombine so that Glom of the Imperial Guard could dispose of them.[3] On their second and final mission, they went to the Nexus of All Realities at the behest of Doctor Strange, but they found that Quasar had already dealt with the problem.[4]

Druid put together another team, the Secret Defenders, and Woods joined this one as well. Druid picked Luke Cage and Deadpool to round out the team, and they went after Malachi, who was trying to gather the scattered parts of the Moebius Stone. At the Chicago Museum of Art, Malachi diverted the team by apparently bringing paintings to life; because these apparitions depended on light, Woods easily destroyed them. Malachi found the next, and final, part of the Moebius Stone and used its power to snare Druid and Woods. By turning to shadow, Woods escaped. Malachi inflicted what should have been a killing stroke, but when Woods survived, she began to wonder about her powers.[5]

Woods' shadow ability again came in handy when the team faced Swarm, since he could not affect her. She bought the team enough time to negotiate with Swarm and defuse his threat.[6]

Woods confronted Druid with her questions about her powers. For answer, Druid sent her into the "Bride of Slorioth," where she met Druid's dark side and finally learned (most of) the truth. Back outside the statue, she confronted Druid again, only to realize that he had had no choice but to do what he did. To mollify her, however, he promised to help her free herself from the Darkforce. Still hurt, but aware of her true nature, she changed her code name from Shadowoman to Sepulchre.[7]

Woods, Druid, and the other team members went to the Gates of Perdition to find Slorioth, a demon. When the first Defenders appeared, Woods actually held her own against the Silver Surfer. She then learned Druid's final secret: out of love and desperation, he had sold his soul to Slorioth to save her life. The demon took control of Druid to try to return himself to Earth. Another mage, Joshua Pryce, joined the battle and saved Woods from final dissolution.[8]

Lindsay McCabe asked Woods for help when her detective partner, Jessica Drew, disappeared. The second Spider-Woman also joined the investigation. Woods took them all to another dimension, where a creature called the Void-Eater had taken Drew. Woods helped rescue Drew, and she sealed the portal to that dimension.[9]

Woods hadn't been involved in the superhuman community for years and took no direct part in the Civil War, although her name appeared on a list of suspected anti-Registration super-powered beings.[10] Jillian remained off the grid as a civilian, living in Phoenix, to avoid the hassles of the Registration Act, but she was unable to secure meaningful employment on her own. Agents of the Brand Corporation offered her a job in private security overseas. After a chance encounter with the Thunderbolts alongside Steel Spider and American Eagle, Sepulchre took the company's offer immediately and fled the country to avoid further hassle by the Thunderbolts.[11]

She was one of the many applicants to be the nanny to Luke Cage and Jessica Jones' daughter, Danielle Cage.[12]

Darkforce: Woods can manipulate dark energy to fly, create dark areas, become insubstantial, and hide in shadows.
Limited Invulnerability: Woods is immune to some attacks that would kill an ordinary person.

Like this? Let us know!
Retrieved from "https://marvel.fandom.com/wiki/Jillian_Woods_(Earth-616)?oldid=6105610"
Community content is available under CC-BY-SA unless otherwise noted.