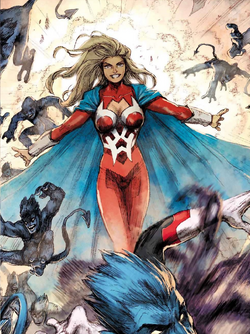 Hair
Blond
Origin
Origin
Human sorcerer;
Jimaine Szardos is the daughter of the Romani sorceress Margali Szardos. She grew up in the circus with her brother Stephan and her adopted brother Kurt Wagner. She nearly left to see the world with Kurt but after an incident where Belasco killed the actress who had taken her place in the circus, she stayed with Margali to learn the Winding Way.
Reality
Earth-616
Place of Birth
Unrevealed location in former West Germany
Creators and Appearances
Creators
Chris Claremont, Dave Cockrum
First Appearance
X-Men #98
(April, 1976)

Jimaine Szardos, a.k.a. Amanda Sefton, is the daughter of the sorceress Margali Szardos. She is herself a sorceress, though not as powerful as her mother. As Amanda, Jimaine is a long-time love interest of the X-Man Nightcrawler (Kurt Wagner).

In her early life, Jimaine lived nomadically as part of a Roma caravan and traveling circus in Eastern Europe along with her mother and brother Stephan Szardos. During this time period, Margali took custody of the infant mutant Kurt Wagner whose physical characteristics led many superstitious people to believe he was a demon.

Unbeknownst to either Jimaine or Margali, Stephan suffered from bouts of homicidal madness and made his foster brother Kurt swear to kill him if he ever became truly violent. Though hesitant, Kurt made the pact and when Stephan eventually did go on a rampage, he was forced to honor it. Although he wanted to explain his actions to his foster family, Margali and Jimaine had vanished. (Kurt then accepted Prof. Xavier’s offer to join the new team of X-Men as Nightcrawler.)

Distraught at the turn of events, Margali began plotting to seek revenge against Kurt for his supposed betrayal. But Jimaine, who was in love with Kurt, couldn’t believe he’d acted maliciously. Hoping to find out more information, she adopted the alias Amanda Sefton, a flight attendant. She and fellow stewardess Betsy Wilford “met” Kurt and his fellow X-Man Piotr Rasputin (a.k.a. Colossus) on Christmas Eve, just prior to the X-Men’s conflict with Stephen Lang’s Sentinels.[1] At that time, she appeared to everyone, including Kurt, to be an ordinary person with no previous connection to him.

Months later, Kurt and Piotr went on another double date with “Amanda” and Betsy in which they were all kidnapped by the assassin Arcade. While Kurt, Piotr and the other X-Men were made to face various deathtraps in Murderworld, the women were held prisoner but eventually released.[6] Amanda continued to present as an ordinary person and demonstrated no magical abilities then. Betsy, a true normal person, never appeared again, presumably (though understandably) having broken up with Colossus.

Eventually, Margali attempted to exact revenge for Stephan's death by constructing a facsimile of Hell as described in Aligheri Dante’s epic poem Inferno as a prison for him. The X-Men, aided by Dr. Strange, sought to rescue Kurt. During the final confrontation with Margali, Jimaine intervened on Kurt’s behalf. Afterwards, she revealed to Kurt that she was Amanda.[7]

With the truth revealed, Jimaine continued to use the name Amanda and work as a flight attendant while still dating Kurt. Although she was not often involved in X-Men adventures, she used her magic to aid them at some key junctures. Most notably, when the Hellfire Club invaded Xavier’s school and took most of the team (and several associates, such as herself) hostage.[8] Amanda quietly cast a spell to make it appear that Wolverine had died. This allowed Wolverine to move freely around the mansion and help turn the tide against their attackers.

After an incident with the Beyonder, Nightcrawler suffered a crisis of faith. He broke up with Amanda and distanced himself from her, causing her considerable anguish.[9] Kurt was later mortally wounded during a battle with the Marauders and was left comatose for months. The rest of the X-Men went into hiding before the conflict could be resolved.

Amanda then attempted to become Doctor Strange's disciple, leading to a brief conflict between her mother Marlgali and the Sorcerer Supreme.[10]

After learning that Kurt had resurfaced as a member of Excalibur in Great Britain, Amanda traveled to Muir Island to try and find him. She was there when the island came under attack by the Reavers and joined the temporary, ad hoc team known as the Muir Island X-Men. Amanda remained at Muir until the residents were possessed by the Shadow King. After the Muir Island Saga, she gave up superheroics.[11]

Kurt called her out of retirement to help retrieve Captain Britain from the time stream. She almost managed the feat but had to exchange Rachel Summers for Brian.[12] Kurt and Amanda then traveled to Germany where their mother had been captured by D'Spayre. They saved Margali and afterwards Amanda joined Excalibur.[13]

Later, Amanda convinced Shadowcat to give Magik's Soulsword to her mother for safekeeping.[14] But Margali instead used it to kill every magician ahead of her on the Winding Way and then joined the London branch of the Inner Circle of the Hellfire Club as the Red Queen. After defeating Margali, Amanda parted ways from Excalibur without telling anyone. The truth was that Margali had secretly taken over her body while the true Jimaine was held captive by Belasco.[15][16]

Jimaine eventually freed herself and defeated her mother once again. She realized that someone needed to rule Limbo and took on the mantle herself. She changed her codename to Magik as a tribute to Illyana. Like Belasco had, she controlled the stepping discs of Limbo through magic.[3][17][18][19][20]

The Archenemy arose out of an attempt to catalog various magics. Jimaine was tricked by S'ym into gathering the other Lords of the Splinter Realms to combine forces against it. By using their combined power, she was able to send Nightcrawler to stop the machine powering it and then destroyed the Archenemy with the Soulsword.[21]

Upon learning that various evil powers sought to take the Soulsword, Jimaine gave it to Nightcrawler for safekeeping. Jimaine was then attacked by Nightmare but saved by her mother Margali. They then aided Nightcrawler against another demon, Hive, who warned the Szardos family that a major war was brewing and that they and the Soulsword were at the center of it all.[22]

Amanda is a sorceress following the path of the Winding Way, whose power waxes and wanes over time. This grants her powers such as teleportation, illusions casting, shape changing, mystical force bolts, hypnotism, and the manipulation of other magical forces at full disposal.

Like this? Let us know!
Retrieved from "https://marvel.fandom.com/wiki/Jimaine_Szardos_(Earth-616)?oldid=5842076"
Community content is available under CC-BY-SA unless otherwise noted.