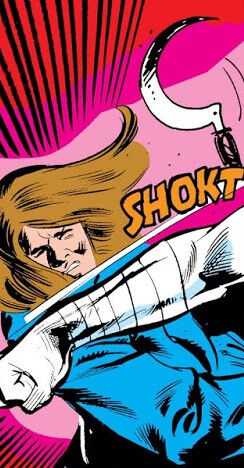 Jimmy began slashing homeless people in an effort to find his father. He then came up with the name Slasher after killing a local bum named Reno Eddie. During the second night he killed another bum, and came across Betrand (his father who he didn't know who he was at the time). Betrand tried to escape, but was slashed accross the forearm. While he was recovering he was taken in by Moon Knight, and he told him who he was and what happened. One week later Moon Knight came up with a plan, and disguised himself as a bum. He then surprised Slasher who tried to escape. After a short fight Moon Knight eventually won.

Very skilled in using the sickle.

Like this? Let us know!
Retrieved from "https://marvel.fandom.com/wiki/Jimmy_Crawley_(Earth-616)?oldid=4287223"
Community content is available under CC-BY-SA unless otherwise noted.