For fictional versions of Jo Duffy as a character within comic books and/or other media,
visit this disambiguation page.
Jo Duffy 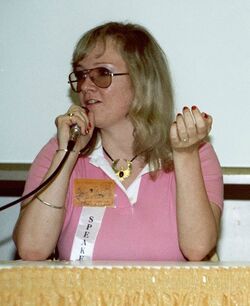 In Iron Man #103 (1977), a character named Jo Duffy appears. She shares her name with real-life Mary Jo Duffy, who became a writer and editor for Marvel starting in 1977 on the editorial staff.[2]

Like this? Let us know!
Retrieved from "https://marvel.fandom.com/wiki/Jo_Duffy?oldid=6836406"
Community content is available under CC-BY-SA unless otherwise noted.