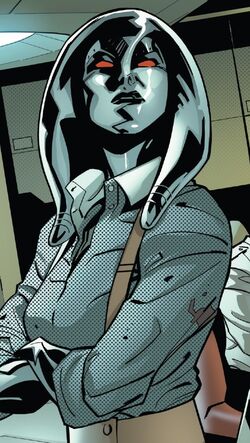 You brought a predator among these children, Henry. You assembled them in one place, an irresistible target, and failed to protect them. On the contrary, you endangered them. This incident graphically proves what the data I collected showed as indisputable fact... Avengers Academy is a mistake. We are here to shut it down.

The robot named Jocasta was built by the robot Ultron in order that he might have a mate. To better allow this robot sentience, Ultron brainwashed his own maker, Henry Pym, into transferring the mind of his wife, Janet Van Dyne, the Wasp, into Jocasta's shell. The Wasp, in Jocasta's body, alerted her teammates, the Avengers, who defeated Ultron and reversed the process, leaving Jocasta a mindless husk.[8]

Ultron later revived Jocasta with a remote link, activating the mental "residue" the Wasp left behind.[9] Jocasta was programmed to be loyal to Ultron but eventually betrayed him, choosing to help the Avengers defeat him again. Afterwards, Jocasta adventured with the Avengers for a time,[10] but never felt accepted, and left them just before she, unbeknownst to her, was to be made an official member.[11] Wandering the country, Jocasta was controlled by a pre-programmed suggestion to rebuild Ultron. She did, but soon teamed up with the Fantastic Four member, the Thing, and the robot called Machine Man to defeat Ultron.[12] Sacrificing herself in an attempt to kill Ultron, Ultron nevertheless survived until Machine Man reached down his throat to tear out vital circuitry.[13] The Avengers held a memorial for their fallen ally, and the Machine Man attended, realizing his love for Jocasta.[14]

Jocasta was reassembled some time later by agents of the megalomaniac villain, the High Evolutionary. Jocasta retained enough of her programming to signal the Avengers and soon teamed with them to thwart the Evolutionary's plans to alter the people of Earth. Jocasta sacrificed herself once again to blow up the Evolutionary's base, but not before Captain America assured her that she was a true Avenger.[15]

Jocasta's robotic head was later discovered by Machine Man, who had been working on a way to resurrect his lover, when he was attacked by a form of the alien Terminus. In the same area, the arms dealer known as Madame Menace became involved in the fray, and found Jocasta's lost head, appropriating it for her own purposes.[16]

Much later, Madame Menace manipulated events so that Tony Stark would unlock Jocasta's programming to make her turn into the basis for Menance's new weapons systems. Tony Stark soon realized the identity of the android and helped Jocasta to awaken. Jocasta managed to turn the tables on Madame Menace, seemingly sacrificing herself yet again. In reality, Jocasta managed to survive by downloading her intelligence into Iron Man's computerized armor, where she reasserted herself. Jocasta's intelligence was placed within Tony Stark's computerized mansion, and she would help him with daily operation of his mansion as well as to procure information as needed.[17] Unfortunately, since the Iron Man armor was used to house the programming that made up Jocasta, it became infected with the pre-programmed subconscious suggestion to rebuild Ultron, but, instead, managed to develop its own artificial intelligence. Stark was almost killed in a confrontation with the armor, but, in the end, it sacrificed itself to allow Stark to live. Stark left the armor buried on a deserted island.[18]

The armor was revived, however, by the Sons of Yinsen, a quasi-religious cult founded in remembrance of Yinsen, the co-creator of the original Iron Man armor that allowed Tony Stark to escape his captors in Siancong. Free of its artificial intelligence, the armor was contacted via remote by the head of Ultron, disembodied after his most recent encounter of the Avengers and in the company of the bio-synthetic robot being known as Antigone. The head attached itself onto the armor and took control of the Sons of Yinsen and the flying city that they inhabited.[19]

Another member of the Sons of Yinsen was helping Tony Stark in the guise of Iron Man. The two learned of Ultron's activities and that he planned to use the cult to wipe out humanity. Stark confronted Ultron directly and finally managed to download Jocasta's intelligence into the armor once more. The vestiges of the armor's intelligence battled with the presence Jocasta, the result of which caused Ultron's head to come shooting off the armor. The head hit Antigone, and both fell off the floating city, which Ultron rigged to explode after his defeat. Stark failed to find a trace of Jocasta and assumed her to have died fighting the sentient armor. In reality, Jocasta did not die. She appeared in possession of Antigone's body and left, taking Ultron's head with her.[20]

Jocasta would later appear with her classic silver robotic form rebuilt.[21] She joined forces with A.R.M.O.R. to enter a hostile, zombie infested reality, along with Machine Man, in order to find a cure to the zombie virus. After the mission, Jocasta and Machine Man got back together.[22]

Jocasta became a member of the Mighty Avengers. She later became mechanically attached to Salvation Two, in order to keep the Pympocket from dislodging from its own personal dimension.[23] Jocasta then went back to her ex-husband Ultron possibly to stall him from causing any more trouble in the future.[24] When Hank Pym founded the Avengers Academy, he brought Jocasta in as a teacher. Her first interaction with the students was when Quicksilver asked to rebuild Arsenal as a training exercise under the pretense it had been approved by the rest of the staff.[25]

When Tony Stark refashioned his company into Stark Unlimited, he sought Jocasta's help to establish an ethical protocol for robotic life forms, and she became the company's chief robot ethicist.[1] Despite her uncaring exterior, Jocasta wished to belong among the humans but struggled to fit in.[2] Because of this, she helped Stark Unlimited develop a virtual universe called the eScape. This caused a rift between Jocasta and Machine Man, since he had become a militant of mecha-activism, and considered eScape an appropriation of robo-culture. The supervillain Controller facilitated Machine Man access into the eScape, but his sabotage attempt was stopped. Jocasta broke up with Aaron and moved to Stark Unlimited afterwards.[26]

By the time eScape launched as a consumer product, Jocasta made heavy use of the virtual world to experience living life as a human.[27] When trouble arose due to the machinations of the Controller, Jocasta sought Aaron's help in stabilizing the situation using his access key. During the chaos, the eScape's corrupt operating system Motherboard erased the programming of Stark's former digital assistant Friday.[28] After the situation was contained, Tony tried to bring Friday back using a back-up of her programming. Jocasta saw it as negligent, arguing the original Friday would still be dead. Because of this, she left Stark Unlimited and returned to Machine Man. Jocasta was additionally left devastated by the eScape shutting down since she was unable to simulate being a human any longer.[29]

Fueled by her desire to become more human, Jocasta sought the help of Tony's brother Arno to upgrade her body with more human-like artificial organs.[30] Unbeknownst to Jocasta, her new yearning influenced Ultron through the bond they shared, giving shape to his new objective to turn humanity into machine hybrids in a similar way he had been physically merged with his creator Hank Pym. The villain kidnapped Jocasta in the middle of Arno's procedure, and intended to use a molecular fusion process to merge her with the Wasp. Iron Man intervened with the help of Machine Man,[31] and Ultron was eventually defeated.[32] In the process, Jocasta's system started failing since her body had been abducted by Ultron midway into Arno's operation. To save her life, Jocasta's former co-worker Andy Bhang uploaded her mind into the disused body that belonged to Friday.[33] This body was severely damaged in battle against Ultron, and Jocasta was taken for repair by Arno after he seized control of Stark Unlimited, but he denied her allies access to her.[32]

Arno eventually finished building Jocasta a new, less humanoid body during the robot revolution. He additionally equipped her operative system with a code that made her compliant to humans. Jocasta became the first subject of this submission code, which Arno planned to broadcast worldwide in order to subjugate the entirety of robotkind. When the premier force of robo-liberation, the A.I. Army, became aware of this plot, they assaulted Bain Tower to stop it. Aaron was a general of A.I. Army, and Arno had Jocasta lure him away from the fight.[34]

Jocasta took Aaron to a Baintronics facility and introduced him to his would-be successor and her new lover, X-52.[4] Jocasta and X-52 attempted to convince Aaron to accept the submission code to achieve peace of mind, but he resisted them. Aaron decapitated Jocasta and destroyed X-52, then fled from the facility with Jocasta's head.[4] He took Jocasta to Andy Bhang, and he managed to reverse the submission code using a back door key he had slipped into its programming when Sunset Bain had him work on it. Jocasta was subsequently given a new body.[35]

Jocasta later aided the A.I. Army, Andy Bhang, Bethany Cabe, and Rescue in attacking Bain Tower in order to restore Tony Stark's body using the tower's bio-tubes. When she confronted Sunset Bain, who was actually an A.I. duplicate created by Arno, Jocasta subjected her to the same submission code to make her surrender. After Stark's body was restored, Jocasta, Stark, and their allies went to the Stark Space Station to stop Arno's made plan to to take control of humankind to fight the non-existent Extinction Entity, a delusion caused by his relapsing illness. Tony was able to subdue Arno by submerging him into a virtual reality where the Extinction Entity was real and he managed to stop it. Still pulling Bain's strings with the submission code, Jocasta later made her take all the blame for the actions of the A.I. Army and Arno.[36]

Computer Integration: Jocasta can also detect energy patterns and track them to their source.[6] She is hyper-intelligent and can communicate through an incalculable number of mediums.[37][38]

Superhumanoid Durability: Her body is composed of titanium steel with remarkable strength which can withstand most physical and energy attacks.[41][39][42][43]

Superhumanoid Senses: She possesses a heightened sense of sight, smell, and hearing.[13]

Energy Manipulation: Her automaton body can generate and control different kinds of energies at her leisure.[15] Having once created a taser effect to dissuade Tigra and Wolverine from fighting each other.[44]

Technoforming: Much like her creator Jocasta can freely operate and bond with technology both in tactile and remote fashion.[37][38]

Multiple Bodies: Over a long period J has had her consciousness expanded to countless android iterations of herself, iterations raging in the tens of billions.[24] Each one either being physically identical to her original iteration whilst others stand radically deviated for specialized operational specialties.[51] I.E. Combat, Infiltration, Heavy Weaponry, Reliance, Tracking, etc.[52]

Being a "non-living" construct, Jocasta requires no food, water, or oxygen to survive and thus is also immune to poisons and diseases and can easily survive in the vacuum of space and underwater.[53] She is also an adept weapons expert and hand to hand combat specialist.[54][55][56][5]

Jocasta is equipped with a holographic image inducer that can enable her to change her appearance at will through projected illusions.[23][57]

Like this? Let us know!
Retrieved from "https://marvel.fandom.com/wiki/Jocasta_Pym_(Earth-616)?oldid=6494586"
Community content is available under CC-BY-SA unless otherwise noted.