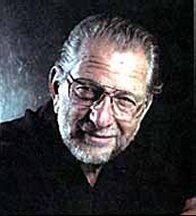 Joe Kubert was born in the village of Jezierzany, which at the time was in Germany, and which only after 1945 became part of Poland.
Kubert was an American comic book artist who went on to found the Joe Kubert School of Cartoon and Graphic Art. He is best known for his work on the DC Comics features Sgt. Rock and Hawkman. His sons, Andy Kubert and Adam Kubert, have themselves become successful comic-book artists.

Kubert's other creations include the comic books Tor, Son of Sinbad, and Viking Prince, and (with writer Robin Moore), the comic strip Tales of the Green Beret.

He was inducted into the comics industry's Jack Kirby Hall of Fame in 1997.

After moving with his family to Brooklyn, New York City, United States, as an infant, Kubert started drawing at an early age and was encouraged by his parents. In 1938, at age 11 1/2, he took the advice of a school friend related to comics publisher Louis Silberkleit, and visited the Manhattan office of Silberkleit's company MLJ Publications, the future Archie Comics. He was taken under the wing of kindly professionals Charles Biro, Mort Meskin, Bob Montana and Irv Novick, who after a few months let the promising 12-year-old artist ink some pages of the teen-humor comic book Archie, penciled by Montana.

Kubert attended Manhattan's High School of Music and Art, and after school and on weekends honed his craft at the quirkily named Harry "A" Chesler's studio, one of the comic-book "packagers" that had sprung up in the medium's early days to supply outsourced comics to publishers. Kubert's first professional job was penciling and inking the six-page story "Black-Out", starring the character Volton, in Holyoke Publishing's Catman Comics #8 (March 1942; also listed as vol. 2, #13). He would continuing drawing the feature for the next three issues, and was soon doing similar work for Fox Comics' Blue Beetle. Branching into additional art skills, he began coloring the Quality Comics reprints of future industry legend Will Eisner's The Spirit, a seven-page comics feature that as part of a newspaper Sunday-supplement.

Kubert's first work for DC Comics, where he would spend much of his career and produce some of his most notable art, was penciling and inking the 50-page "Seven Soldiers of Victory" superhero-team story in Leading Comics #8 (Fall 1943), published by a DC predecessor company, All-American Comics. Through the decade, Kubert's art would also appear in comics from Fiction House, Harvey Comics, but he was otherwise worked exclusively for All-American and DC.

In the 1950s, he became managing editor of St. John Publications, where he and the brothers Norman Maurer and Leonard Maurer produced the first 3-D comic books, starting with Three Dimension Comics #1 (Sept. 1953 oversize format, Oct. 1953 standard-size reprint), featuring Mighty Mouse. According to Kubert, it sold a remarkable 1.2 million copies at 25 cents apiece at a time when comics cost a dime.[1]

Kubert served as DC Comics' director of publications from 1967-76, when he left to found the Joe Kubert School of Cartoon and Graphic Art in Dover, New Jersey. During his time with DC, Kubert initiated titles based on such Edgar Rice Burroughs properties as Tarzan and Korak. His own work on Tarzan has been collected by Dark Horse Comics in a hardcover book series, Much more about DC career TK.

In 2006, Kubert wrote and drew "Sgt. Rock: The Prophecy", a six-issue miniseries.

Kubert wrote and drew a collection of faith-based comic strips beginning in the late 1980s for Tzivos Hashem, the Lubavitch children's organization, and Moshiach Times magazine. The stories, "The Adventures of Yaakov and Yosef", were based on biblical references, but were not Bible stories. Many were based on stories of Chabad-Lubavitch Rebbes and disciples. [2]

As of the mid-2000s, Kubert is the artist for PS Magazine, a U.S. military magazine, with comic-book elements, that stresses the importance of preventive maintenance of vehicles, arms, and other ordnance. (The name derives from its being a "postscript" to other, related publications.)

Kubert has drawn graphic novels, including Yossel: April 19, 1943 (2003) and Fax from Sarajevo (1996), the latter initially released as a 207-page hardcover book[3] and two years later as a 224-page trade paperback.[4] The non-fiction book originated as a series of faxes from European comics agent Ervin Rustemagić during the Serbian siege of Sarajevo. Rustemagić and his family, whose home and possessions in suburban Dobrinja were destroyed, spent two-and-a-half years in a ruined building, communicating with the outside world via fax when they could. Friend and client Kubert was one recipient. Collaborating long-distance, they collected Rustemagić's account of life during wartime, with Kubert and editor Bob Cooper turning the raw faxes into a somber comics tale.

Kubert's several awards and nominations include:

Like this? Let us know!
Retrieved from "https://marvel.fandom.com/wiki/Joe_Kubert?oldid=6837218"
Community content is available under CC-BY-SA unless otherwise noted.