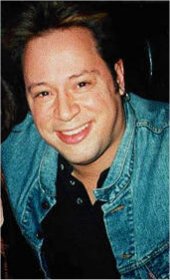 Joseph Quesada was born on January 12, 1962, to a Cuban father and grew up in Jackson Heights, Queens. He earned a bachelor's degree in illustration at the New York School of Visual Arts. For a time he earned his living as a musician.

In 1991 he became a colorist for Valiant Comics. His first penciling job was on Spelljammer at DC, where he also worked on The Question, The Ray, and Batman: Sword of Azrael. In 1992 he won the Harvey Award for best new talent. His exceptional work led to other assignments at Marvel, Chaos, Dark Horse, Harris, Image, Topps, and Valiant.

By 1994 he was ready to strike out on his own. With Laurie Bradach and Jimmy Palmiotti he founded Event Comics and created Ash. Their other titles included The 22 Brides, Kid Death and Fluffy, and Painkiller Jane.

The success of Event Comics led to a major contract with Marvel to produce Marvel Knights. This new line of titles would showcase characters who had slipped out of the limelight, such as the Black Panther, the Black Widow, Daredevil, and the Inhumans. Quesada recruited fresh talent from outside the mainstream, including Brian Michael Bendis, Steve Dillon, Garth Ennis, David Mack, Mark Millar, Grant Morrison, and Michael Avon Oeming, to work on these titles. He even contributed pencils for a Daredevil story written by Kevin Smith. The Knights line became a hit, and so did Quesada.

Editor in Chief at Marvel

In January 2000, Bill Jemas became the head of Marvel. As part of a campaign to revitalize and shake off the effects of bankruptcy, in August 2000 he sacked Bob Harras and installed Quesada as editor in chief. Rather than letting Marvel rest on its past glories, Jemas and Quesada brought in new talent and new ideas. The campaign worked; sales went up 75% in their first year and continued to rise.

Quesada and Jemas presided over the introduction of the Ultimates line. Forty years of continuity had made it difficult to attract new readers. Their solution was to use the same classic characters but give them fresh starts, at once dropping the continuity baggage and updating the characters for a younger audience. Like the Knights, the Ultimates became a hit. During this time, they began repackaging comics as trade paperbacks and placing them in mainstream bookstores.

Other projects created controversy. For instance, Wolverine had always lacked a complete origin, and that mystery contributed to his appeal. Quesada and Jemas commissioned a miniseries, aptly and simply titled Origin, to gave Wolverine a father and a childhood. After so much time and speculation, no story could meet the expectations for it;on the other hand, it gave this immensely popular character a new depth. Another project, the Max line, broke from the Comics Code Authority to offer adult content. In 2005, Quesada commissioned the Decimation event, which rid all but 198 mutants of their powers. Although this was a creative move due to the sheer amount of mutants, further controversy occurred. Two years later he commissioned One More Day, which is now one of the most controversial Marvel stories of all time. He also created the idea of the Red Hulk.

Jemas became chief operating officer of Marvel Entertainment Group in 2002, while Quesada stayed in place. Any doubt that Jemas had "carried" Quesada vanished. He steered a difficult path between attracting new readers and alienating current readers, who are always quick to complain about changes to "their" comics. Disagreements with distributors, competition from other media, and a large lingering debt also made his job difficult. On the other hand, his unmistakable love for comics, enthusiasm for his job, and sure artistic judgment restored a measure of respect for Marvel that it had lost in the 1990s.

As an editor, Quesada made some policy shifts, with (as always) mixed reactions. The few Marvel characters who smoked could no longer do so, probably a reaction to his father's battle with lung cancer, as well as a desire to provide good role models for children. Other changes included restoration of issue numbering (e.g. Amazing Spider-Man went from volume 2 #58 to volume 1 #500), a prohibition on character deaths, and the discontinuation of footnotes.

Over the years, Quesada continued the practices that had made him a major figure in the industry. He recruited the best talent he could find and gave them as much latitude as possible. Equally as importantly, he stayed in touch with fans and listened to their concerns and ideas.

Quesada is a member of the Executive Committee of A Commitment To Our Roots (ACTOR), a non-profit organization that provides support for retired or disabled comics creators from the Golden and Silver Ages. Other members include Dick Giordano, Joe Kubert, Dennis O'Neil, George Perez, John Romita Sr., and Roy Thomas.

Quesada has a wife, Nanci, and a daughter, Carlie, who is the inspiration for the character Carlie Cooper. He lives in New York City. As of April 2014, he is still chief creative officer at Marvel and occasionally contributes art, such as for Age of Ultron #10.


Retrieved from "https://marvel.fandom.com/wiki/Joe_Quesada_(Earth-1218)?oldid=5332141"
Community content is available under CC-BY-SA unless otherwise noted.