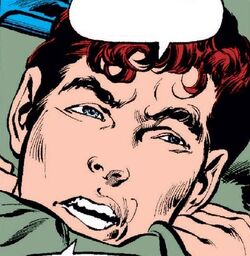 Joey was an orphan kid who was rescued by Black Bolt from his uncle Roscoe.[1] He then tried to help Black Bolt, who had been brain-blasted by Maximus.[2]

Joey was later once again kidnapped by his uncle and Mr. Dibbs.[3] He eventually managed to escape and set Black Bolt free.[4] Joey was later ambushed and knocked out by Magneto's mutates, who managed to kidnap Black Bolt.[5] When he awoke, Joey himself was abducted by the Trikon.[6]

He later was then pinned in, with his friend Black Bolt, by a street gang hoping to exploit Bolt's abilities, however they were saved by the timely intervention of the Avengers. He then traveled with them to Attilan to destroy the barrier erected by Maximus.[7]

Like this? Let us know!
Retrieved from "https://marvel.fandom.com/wiki/Joey_(Orphan)_(Earth-616)?oldid=6467741"
Community content is available under CC-BY-SA unless otherwise noted.