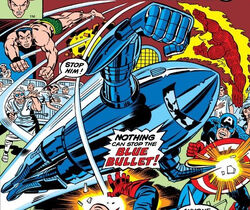 Johann Goldstein worked at a british military hospital on the construction of a human rocket, the Blue Bulllet - secretely working for the Germans who were blackmailing him after having kidnapped his brother. His experiments caused a power outage during the operation of Jacqueline Falsworth and her father Union Jack, bringing Goldstein to the attention of the Invaders. Goldstein was then ordered by his German superiors to destroy the team at all costs. Using his Blue Bullet armor, he battled the Invaders, but was defeated.[1]

Like this? Let us know!
Retrieved from "https://marvel.fandom.com/wiki/Johann_Goldstein_(Earth-616)?oldid=5824686"
Community content is available under CC-BY-SA unless otherwise noted.