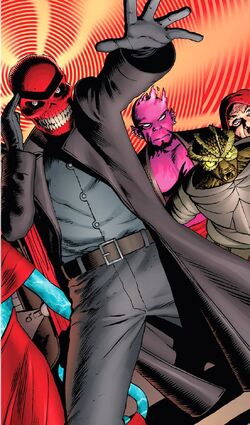 Do you know what having the ability to overtake minds with such ease has taught me? The emptiness of it. That true submission... is voluntary. If you want to rule the world, you cannot simply break it-- You must change it.

Like many of the Red Skull's other fail-safes, this clone (created by Arnim Zola in 1942 under the orders of the original when he suspected the Reich would be defeated during World War II) was meant to awaken in the changed landscape of the future where the Red Skull was just a forgotten menace of a fallen regime. He awoke to find the world in a turbulent period and ripe for conquest.[6]

Seeing how mutants nearly destroyed the world convinced him that they were the threat. He searched the world and recruited exceptional individuals, forming a group of S-Men to combat the mutant menace. He also stole the brain of Professor X in order to gain his telepathic powers, reasoning that it would be best to use it than waste his time trying to gather relics and arcane objects which would only reveal his hand.[7]

After subjugating the Scarlet Witch and Rogue to his will,[6] Shmidt led an attack in New York to test his new mental abilities, forcing the citizens to turn on each other and clashing with the Avengers Unity Division.[8][9] This event became known as the "Red Riot" which stayed in the news for over two weeks.[10][11]

He founded I.B.S.S. through his puppet Marcus Glove, meant to be a vehicle for espousing his ideology. He cloaked his intentions with the rhetoric of hipster pop-culture and modern science.[12][1] While it did not work out as he hoped as he was stymied by the actions of Charles Xavier's own son Legion, it did secure more funding for him.[13]

Knowing that his ally Arnim Zola was unlikely to have died,[14] he acted upon a promise and reached out to his old friend's daughter Jet Black.[15]

He turned out to be right and greeted his friend and benefactor when Zola returned to Earth from his work in Dimension Z,[16] and after Zola's successful distraction sent off his S-Men on several missions.[17]

The Red Skull turned Genosha into a concentration camp, and abducted numerous mutants[18] and Inhumans.[19] His activities were tracked down by Magneto[19] at the same time Scarlet Witch, Rogue, and Havok from the Avengers Unity Division were captured by the S-Men and brought to the island.

After escaping captivity, the Avengers encountered and rescued Magneto.[20] The Red Skull and the S-Men confronted the escapees, but after using Mutant Growth Hormone to enhance his powers, Magneto managed to wipe out all members of the S-Men, before killing the Red Skull without the use of his mutant gifts, offering him a "pure" death. However, Erik had merely unleashed a more powerful persona of the Red Skull, Onslaught.[21]

The Red Onslaught started telepathically spreading hate across the world, as Magneto and the Avengers Unity Division tried to stop him. The Avengers came to help after locating the Skull following the discovery he was the source of the "World War Hate," who were shortly after joined by the X-Men and other allies. However, the Red Onslaught deployed two Adamantium Stark Sentinels which had been created by Iron Man, under the influence of the Skull's telepathy, who had been made forget their creation.[22]

The Sentinels managed to turn the odds in favor of the Red Onslaught, as they managed to capture almost every hero in the scene. The cavalry arrived in the form of a group of super villains Magneto had assembled after temporarily abandoning the fight, because the Stark Sentinels had been made to fight using the known weaknesses of heroes, not villains.[23]

The Scarlet Witch and Doctor Doom managed to cast a spell to invert the axis of Skull's brain, to make a fragment of Charles Xavier still present in it take control of the Skull's body and stop the Red Onslaught. The inversion spell was a success, and the Red Skull was knocked unconscious and reversed from his Red Onslaught form. Before he could wake up to reveal whether Charles Xavier was now in control or not, as the X-Men wanted, the Avengers decided to be cautious and take the Red Skull prisoner to the Stark Tower.[24]

The Red Skull had actually been cloaked by Jarvis, who didn't want the Avengers to become murderers. He was later freed by Steve Rogers, who planned on using him to reinvert the heroes.[26] With the help of Doctor Doom and the Scarlet Witch, at the time possessed by the spirit of Daniel Drumm, the Red Skull managed to reinvert almost all those who had previously been affected, turning himself back to evil as well. However, the Red Skull was taken prisoner by Doctor Doom and brought to Latveria for experimentation.[3]

After being visited by a newly-conceived omnipotent being known as Kobik, the Red Skull put a plan into motion to cause Steve Rogers's fall once and for all. Kobik had been accidentally created by S.H.I.E.L.D., it was a being composed of different fragments of Cosmic Cubes accumulated over the years. One of these fragments belonged to a Cube that had fallen under the original Red Skull's possession several years earlier. The memory of Skull's obsession for that Cube was misinterpreted by Kobik's childish mentality as affection, so she went to the Red Skull in search for love. The Red Skull took advantage of the child's affinity and naivety and taught her the ways of Hydra. Kobik began to lead a double life, using her omnipresence to be in the company of both S.H.I.E.L.D. and the Red Skull at the same time, while keeping the latter a secret.

When Kobik's innocently deranged set of values caused her to rewrite the past of her caretaker, Erik Selvig, and insert a life-long loyalty to Hydra in it, Red Skull was inspired to come up with a master plan for Rogers' end. Under the orders of the Red Skull, Selvig proposed to S.H.I.E.L.D. the creation of Pleasant Hill, a picture-perfect town inhabited by reformed super-villains, whose appearance and memories were tampered with using Kobik's power.[27] As a consequence of the Red Skull's manipulations, one of the villains, the Fixer, subconsciously created a device that returned him to his true self, and he then proceeded to use it on several other inmates, who, being led by Baron Zemo, unleashed a coordinated assault on the town to wreak havoc in revenge for having their lives tampered with.[28]

Red Skull subsequently infiltrated the town under the telepathic disguise of a inhabitant named Father Patrick, and made his way to the town hall, which had been turned into a lock-up to hold numerous S.H.I.E.L.D. personnel and citizens hostage, including S.H.I.E.L.D. Director Maria Hill and Steve Rogers. Using his telepathy, the Skull implanted in Zemo the idea to let Father Patrick escort Steve Rogers and Maria Hill to get medical help for the latter.[27] When Rogers got to Erik Selvig for help, Selvig directed him to a bowling alley in order to find Kobik to restore peace. As part of the Skull's plan, when Rogers tried to reach out to Kobik, he was brutally attacked by Crossbones. With Rogers on the brink of death, Kobik intervened, and restored him to his prime. With the objective to turn Rogers into the most perfect version of himself, Kobik created a new reality in which Rogers was indoctrinated into Hydra since youth, and replaced Steve with this twisted version of himself.[27]

With his objective achieved and Zemo's uprising eventually being contained by the Avengers, the Red Skull fled from Pleasant Hill. In the aftermath of the incident, the Red Skull, Sin and Crossbones formed a new Hydra out of Neo-Nazi groups. The Skull intended to take the organization back from its modern incarnation to its Nazism days and control the world not by a scheme to take over it, but by changing it to his image to the point where it would accept him as his leader.[29]

Showdown with the Avengers Unity Squad

The Red Skull eventually made his move against the Avengers Unity Squad, activating a psychic trigger he had implanted on Quicksilver's mind to take control over it and force him to capture his teammates.[30] After successfully taking control over the minds of the captured Avengers (with the exception of Cable, who erased his own consciousness),[31] the Red Skull sent them after Deadpool, who managed to escape from Quicksilver. However, with the help of Spider-Man and Wong, Deadpool invaded the Avengers Mansion and broke Rogue free of the Red Skull's control by making her wear an old Magneto helmet, which prompted her to capture the villain.[32]

He was later submitted to a brain surgery conducted by Beast to remove the portions of Charles Xavier's brain from his own, and put into S.H.I.E.L.D. custody soon afterwards.[33]

After escaping from S.H.I.E.L.D. custody, a weakened Red Skull went to his private estate to rest, but was instead attacked by Steve Rogers, who had been planning to overthrow Shmidt since Kobik's tampering brought him to this world. The Skull was beaten to a pulp before being hurled through a window by Rogers, sending him to his death.[5] The Skull's head was later presented to Magneto by Rogers as a peace offering to convince Magneto to agree to the creation of the mutant nation of New Tian so Rogers didn't have to fight the mutants when he took over the United States.[34]

None, after Charles Xavier's brain was surgically removed from his own.[33]

Strategic Genius: The Red Skull is a master of political, military, and subversive strategy, as well as a brilliant planner and organizer.

Hand to Hand Combat: The original Red Skull was a fine hand to hand combatant, although not to the level of Captain America. He was also a brilliant fencer and skilled marksman, it is assumed that this clone carries these traits.

His left hand was severed in his first confrontation with the Unity Division.[9] He now uses a modern prosthetic.[37]

Retrieved from "https://marvel.fandom.com/wiki/Johann_Shmidt_(Clone)_(Earth-616)?oldid=5689409"
Community content is available under CC-BY-SA unless otherwise noted.