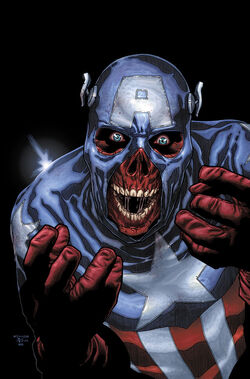 The Red Skull organized all the Villains in his world, and coordinated an all-out attack on the heroes. The villains won, killing most of the heroes, and dividing up the country amongst their lieutenants.[1] After this victory, he made himself President of Amerika. Living in the Nazi-redecorated White House[2], Red Skull had taken to wearing Captain America's old bloodstained uniform and collecting gruesome trophies from fallen heroes.[3]

When Logan's body was brought in with Hawkeye's body, he healed and was able to get the jump on Red Skull's goons. After fighting with the Skull for a bit, Logan was able to decapitate him with Captain America's Shield.[3]

Seemingly those of the Red Skull of Earth-616.

Seemingly those of the Red Skull of Earth-616.

Like this? Let us know!
Retrieved from "https://marvel.fandom.com/wiki/Johann_Shmidt_(Earth-807128)?oldid=6539688"
Community content is available under CC-BY-SA unless otherwise noted.