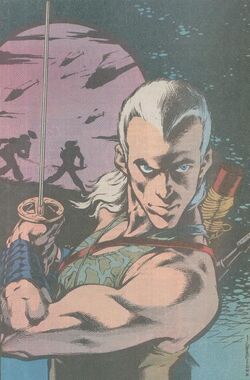 Nth Man: The Ultimate Ninja is a comic book about an American ninja in World War III. It was written by Larry Hama between 1989-1990. The first appearance of Nth Man and Alfie O'Meagan was in Marvel Comics Presents #25 in August, 1989.

The series concerns two boys; "one is very, very good, and one is very, very bad." One would grow up to be the CIA's deadliest assassin. The other would save the world from nuclear war. The trouble is... the assassin was the good one...

Two boys grew up at an orphanage during the 1960's. John Doe was adopted by an elderly Japanese man who just happened to work for the CIA's "Black Ops" division. He was raised as a ninja, taught to kill without regret, and became the best at what he did.

Alfie, John's only childhood friend, was different. He had visions of possible futures (the "could-be's") and could make other people see them too. Soon he could do more than see things far away; he could actually make things happen; Little things, at first, then on a much grander scale as his power grew.

Somehow, the government had learned of Alfie and his growing power. He was adopted by the O'Meagans, who were actually government spies. They hoped to control him. Naturally, things didn't work out as planned...

The rest of the story takes numerous twists and turns, as Alfie gains vast power while losing his sanity. He destroys all the world's nuclear weapons (since this takes place in the late 1980s, the Cold War turned very hot, triggering a massive conventional war). When the Soviet Union launches biological weapons, Alfie's attempt to turn them harmless backfires. His fractured mind only turns them into a mutagenic virus, and millions are transformed into psychotic, cannibalistic "moots".

The storyline is complex, following numerous characters through war zones, plague-ridden post-Apocalyptic landscapes, time, and space. With Alfie's insane mind bending reality around them, not even the main characters can be sure what's real. In the end, both John and Alfie find out more about themselves than they wanted to know... and the final pages of the story are as twisted as the beginning.

The Excalibur team of superheroes ran into Alfie O'Meagan in his alternate reality in Excalibur #27. Here Alfie had assumed a form and giant stature similar to that of Galactus, except for the helmet which he only wore on one occasion. After a fight in which Rachel Summers ferociously unleashed the full power of the Phoenix Force on Alfie in his Galactus form and brought him to his knees, the team was sent back to their native reality, Earth-616 when Nightcrawler pushed "Cancel" on the remote control of Alfie's television, which nullified everything that had occurred.

Could flip reality in a given area, making those within the area feel like reality was upside down. He could also do the same with time, causing someone to live their life backwards.

A trained ninja, capable of precision aiming, enhanced agility, and knowledge of most weapons and vehicles.

Like this? Let us know!
Retrieved from "https://marvel.fandom.com/wiki/John_Doe_(Earth-8908)?oldid=4945725"
Community content is available under CC-BY-SA unless otherwise noted.