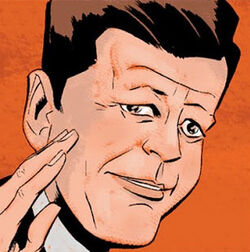 The world's afraid of you, Mr. Brashear. They have visions of a vengeful, super-powered negro taking over the world. ... I'm asking you to stand down. To cease all your activities as the Blue Marvel. Effective immediately. We can't have you operating anymore.

John F. Kennedy was the 35th president of the United States.[1]

During World War II, he served as commander of a motor Torpedo boat and met Captain Savage's Leatherneck Raiders once.[2]

The Invaders were in Boston when they uncovered a plot by the rogue android Adam II to replace world leaders with android doubles. In the effort to rescue a young Senatorial candidate, John F. Kennedy, the mission succeeded but Captain America (William Naslund) lost his life.[3]

In 1960, Kennedy became President and appointed his brother Bobby Kennedy Attorney General. The choice was controversial, with publications such as The New Republic calling him inexperienced and unqualified. However the committee voted almost unanimously for him; receiving all but one vote.[4] President Eisenhower pardoned Isaiah Bradley on the day of Kennedy's inauguration.[5]

In 1962, Blue Marvel received the Presidential Medal of Freedom from JFK on the day the President asked him to retire; it had been discovered by the public that he is an African-American. As the Blue Marvel, Brashear wore a full-face helmet - but when it was damaged in a battle, his identity was revealed. A massive controversy ensued as the America of 1962 was too racist to accept a black super-man. The President reluctantly decided to ask Brashear to step back. Torn between myriad considerations, the Blue Marvel conceded.[6]

JFK sent a American trained Cuban rebels to invade Cuba at the Bay of Pigs. The Cuban army quickly defeated the invading forces.[7]

On October 16th 1962, Kennedy learned the Soviet Union was installing nuclear missile sites in Cuba. The president initiates a blockade of Cuba. But ultimately Kennedy called Khrushchev bluff and removed the missiles.[8]

On Friday, November 22nd, 1963, JFK was assassinated in Dallas, Texas by a lone gunman identified as Lee Harvey Oswald.[9][8] The exact details and the truth of the incident still remained a mystery.[10]

The Cloaked Clairvoyant predicted both of the Kennedy's death but was ignored as a crackpot.[11]

Years later he returned as a Zombie along with other zombified U.S. presidents.[12].

The following appearances of John F. Kennedy should be considered topical references: When Doctor Doom threatened to wage a one-man war against the US unless he received a post in the President's Cabinet, President Kennedy rejected it. Doom then caused chaos among the country's electrical and electronic devices. The Joint Chiefs of Staff asked the Fantastic Four for help, which was provided.[13]

Years after Kennedy's death, the Jester kidnapped a technician to make him create fake footage he broadcasted as real, including images suggesting that President Kennedy and his brother were still alive, hidden because of an international conspiracy, and several others (such as the fact that Vietnam War never existed and was a cover for illegal wars, and footage to ridicule D.A. Franklin Nelson before the elections) to boost the conspiracy-minded fear in the population.[14]

Like this? Let us know!
Retrieved from "https://marvel.fandom.com/wiki/John_F._Kennedy_(Earth-616)?oldid=6474943"
Community content is available under CC-BY-SA unless otherwise noted.