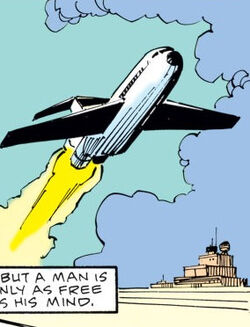 JFK is the top international air passenger gateway to the United States and is also the leading freight gateway to the country by value of shipments.

Before having that name, when it was still called Idlewild Airport, it was near the lair of evil Puppet Master. The Puppet Master took control of his enemies Human Torch and Thing, making them fight each other, and he also moved them to the Airport to personally witness their defeat - however, Masters' daughter Alicia discovered her father's involvement and turned the tables on him.[1]

Anthony Stark landed here back from the Pentagon, and was very well received by Pepper Potts and Happy Hogan.[1]

When Happy quit his job with Tony Stark, he took a one way flight to Shannon, Ireland to get away from his life at Stark Industries.[2]

When Jasper Sitwell was searching for Morgan Stark, he received a notice from Nick Fury telling him that Morgan was being escorted onto a private plane by some of the Maggia's hired guns. Rushing to the airport, Jasper managed to incapacitate the Maggia gunsels and save Morgan, who told Jasper what he had done.[3]
As the convoy escorting Bruce Banner was attacked by the Rhino, the airport was closed until further notice and a state of emergency was announced, alerting all aircraft to proceed to other airports.[4]

Alerted by the news that Doctor Octopus had taken over the plane with General Su aboard, Peter Parker, Robbie Robertson and Captain Stacy went to the airport, which was jammed with militant demonstrators. As the plane landed, Spider-Man managed to free everyone on board the plane, among whose passengers there were also J. Jonah Jameson, Colonel Jameson and Captain Fong. During their fight, the Doctor managed to activate the plane's engines with one of his arms. When the plane moved down the runway out of control, Spider-Man fled the jet, and it soon crashed.[5]

Returning home from London, Peter Parker landed on the JFK and went straight to the Daily Bugle Building to sell his pictures to Joe Robertson.[6]

Like this? Let us know!
Retrieved from "https://marvel.fandom.com/wiki/John_F._Kennedy_International_Airport?oldid=5775911"
Community content is available under CC-BY-SA unless otherwise noted.