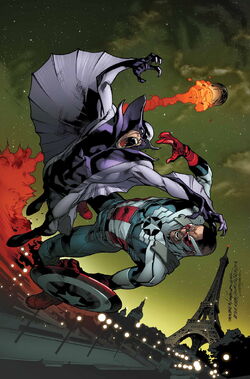 You ally yourself with amateurs you Yankee fool!

Lord John Falsworth was the youngest of two sons of Lord William Falsworth, one of the wealthiest members of the British aristocracy in late Victorian and Edwardian times. John left, embittered, when his older brother Montgomery inherited the title and the bulk of his estate upon William's death, shortly before World War I.

Eventually, Falsworth sought the castle Dracula in Romania in order to find and control the Dracula as a means for achieving immense wealth and power. However, Falsworth fell victim to Dracula's hypnotic powers and was turned into a vampire himself. Dracula bid Falsworth to return to England to wreak havoc upon the country that had repulsed him earlier (as detailed in Bram Stoker's 1897 novel) while Dracula himself fought Abraham van Helsing and other enemies.[2]

Once World War I broke out, Falsworth, still intent on destroying England, offered his services to the German intelligence, who gave him the code-name Baron Blood. Falsworth adopted his costume to better instill terror in his victims. Falsworth became the German's greatest secret weapon in the final months of the war. He battled Freedom's Five, a group of costumed agents from Great Britain and her allies, but, although Blood was always defeated, he also managed to escape. He was finally found and fought by the costumed hero, the original Union Jack (and secretly Falsworth's elder brother Montgomery). Union Jack injured Falsworth with a silver blade, causing him to flee England.[3]

After World War I, Falsworth began studying occult arts and followed Adolf Hitler's rise to power. He understood Hitler and his Nazi party were similar to him.[2]

Although Falsworth's activities remain largely unrevealed during this time, at some point he again offered his services to the emerging Nazi regime in Germany. German scientists performed painful experiments which enabled him to avoid his vulnerability to direct sunlight. During World War II, German intelligence once again sent Falsworth to England to continue a new reign of terror.[2]

John Falsworth returned to the Falsworth family home posing as his own son to hide his identity. He was eventually confronted by his brother, who came out of retirement as Union Jack after Falsworth bit and nearly killed his daughter, Jacqueline (later, the heroine Spitfire). His brother, aided by the Allied heroes collectively known as the Invaders, discovered Blood's secret identity. In the ensuing battle, Falsworth was impaled when he fell on stalagmite that had traces of silver in it.[4]

However, Falsworth was resurrected by superhuman Axis agents, and he joined their team, the Super-Axis, who soon were defeated by the Invaders. The complete history of Falsworth's activities at this time are unknown.

In 1945, towards the end of the war, Falsworth defected from the Axis and journeyed to the United States of America alongside his master Dracula, enlisting Weapon Plus to find a way of ridding vampires of their weaknesses. Weapon Plus commandeered the Ravencroft Institute and performed gruesome experiments on the patients that turned many of them into vampiric abominations called the Unwanted. Weapon Plus' experiments were terminated when Captain America and Bucky Barnes attacked the institute, Dracula and Falsworth retreating.[5]

After the fall of the Reich, Falsworth escaped alongside Brain Drain on a ship. In the South China Sea they were attacked by the Avengers, but were teleported away by Geoffrey Sydenham before they could be captured and were offered positions in ICON.[6] During a later battle with the Avengers, he was stabbed in the chest by a silver bladed wooden javelin by Kraven the Hunter.[7] Though this didn't kill him, he was seemingly later destroyed by a woman via a wooden stake and, as a member of aristocracy, entombed in the Tower of London.

In recent years, Falsworth was resurrected by a mortal agent of Dracula known as Dr. Charles Cromwell. Cromwell fell under Falsworth's influence, who learned all he could of medical practice from Cromwell. Continued vampiric activity raised the nearby villager's suspicions, but were tricked by Falsworth into destroying Cromwell and his daughter as the vampires. Falsworth took Cromwell's identity. The police attributed the vampiric activities to a serial killer, but Falsworth's brother, a now-aged man, summoned his former ally, Captain America, to investigate his suspicions that Falsworth was behind it all [8].

Falsworth attacked his brother, posing as Cromwell, his brother's physician, but was defeated by Captain America. Falsworth's body was decapitated and burned separately, his ashes scattered in different areas, to ensure that Falsworth could never be revived again. After burying his brother, Lord Falsworth decided to stop fighting and died [9].

After the Terrigen Mist hit the Earth, creating new Inhumans in the process, Baron Zemo reassembled Hydra to recruit these new superbeings to their cause. One of them, Lucas, had a toxin in his blood that was capable of sterilizing human beings. Zemo saw this as an opportunity to finally seize control of the world. He planned to infect every human on Earth with Lucas' blood, while all Hydra agents over the world wouldn't be affected by the infection as they had already received the cure.[11]

As a contigency plan to spread Lucas' blood worldwide should everything go wrong, Zemo had Baron Blood resurrected[12] and recruited to Hydra, promising to give him a domain after the leveling. The contigency plan was for Blood to suck enough blood off Lucas and detonate himself in the atmosphere, releasing the infection upon the world.

The new Captain America Sam Wilson, with Nomad and Misty Knight's help, was able to thwart Hydra's plans, so Zemo ordered Blood to proceed with the contigency plan. Blood was followed by Redwing in Paris, France, and as soon as he realized it, bit and killed the bird.[13] Then, after dealing with the new Cap, Blood went into Earth Orbit, ready to self detonate, but was attacked again by Cap. Enraged, Blood spit Lucas' blood into Sam's mouth, infecting him with the sterilizing toxin. With his dream of having a family destroyed, Sam attacked Blood without mercy, knocking the vampire out. He took off the bombs on his body and left him floating in space to be recovered later by S.H.I.E.L.D.[14]

Baron Blood possessed the typical powers associated with vampires, although to a greater degree than most:

Baron Blood was a good hand to hand combatant and was a highly skilled espionage agent during World War II.

Baron Blood possessed most of the same special vulnerabilities common to vampires:

Like this? Let us know!
Retrieved from "https://marvel.fandom.com/wiki/John_Falsworth_(Earth-616)?oldid=6119239"
Community content is available under CC-BY-SA unless otherwise noted.