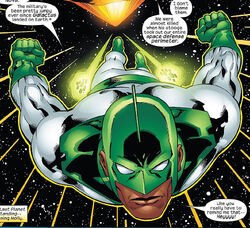 John Foster, a bush pilot, is the son of William Foster, a research scientist who had a brief superhero career (as Black Goliath and Giant-Man). John accompanied his father on reforestation techniques research mission when two unidentified objects crashed in the forest near them. The objects were revealed to be a Kree spacecraft and one of their robotic Sentries. John and his father became trapped on the ship, his father's leg crushed beneath a metal door. In an attempt to save his father, John used the bionic interface and was transformed. He was made part Kree, had information downloaded directly into his brain and was uniformed in a battle suit. He dubbed himself the Earth Sentry, and decided to protect and defend Earth's interest, especially from the Kree who seem to have plans for Earth. Turning down Avengers membership, he flew away.[1]

Earth Sentry reappeared as part of Mainframe's reinforcements to battle Hope Pym and the Revengers. He accepted reserve membership in the Avengers.[2] Earth Sentry assisted Nova in investigating a Skrull invasion of Earth airspace.[3] After a majority of the team was injured battling the Hulk, Earth Sentry and the reserves were called up by the Avengers to deal with the apparent return of Magneto.[4]

Earth Sentry was on the outer rim of Earth's Satellite Defense Program with Nova as the sensors picked up the energy signature of Dominas, the herald of Galactus who rode an tidal wave of energy which destroyed the satellite as he made his way to Earth.[5] It was later confirmed by President Bridge that Sentry had survived the explosion.[6]

John Foster is an experienced pilot.

Kree Militia Uniform: Earth Sentry wears a jet-belt which allows him flight, has a wrist blaster and, presumably, various other systems in his battle armor.

Like this? Let us know!
Retrieved from "https://marvel.fandom.com/wiki/John_Foster_(Earth-982)?oldid=5465844"
Community content is available under CC-BY-SA unless otherwise noted.