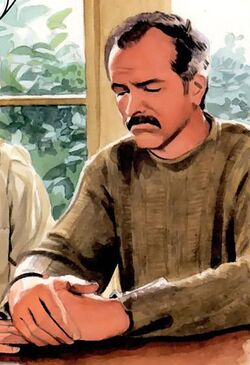 Something about him gives a person a feeling of confidence in him... He almost seems to know what you're thinking!

Professor John Grey worked as a teacher in the History Department at Bard College.[citation needed]

John was the husband of Elaine Grey, and the father of Roger, Liam, Sara, Julia[1], and Jean Grey, founding member of the X-Men.[2]

Jean Grey started attending Xavier's School for Gifted Youngsters, becoming a member of the X-Men. Her parents were unaware that their daughter was a mutant, and were not informed of the school's true nature. They were instead told that the School was a progressive private school, and that their daughter had won a free scholarship.[3]

Elaine and John were hesitant to part with their daughter, but were impressed when the School was recommended by Xavier's contacts in Washington, D.C.. They were told that some of the School's courses involved matters classified as top secret by the United States Government.[3]

Professor X wrote to Elaine and John every week, with a progress report on Jean. Xavier also informed them about the School's other students, whom the Grey family had not met in person.[3] John found Xavier to be trustworthy, and he was impressed that Xavier could seemingly predict what everyone was thinking about. He was however curious about the nature of the School's connection to the government, and suspected that Xavier was teaching Jean about scientific secrets.[3]

Elaine and John were heading to New York City, in order to visit the World Fair. They decided to visit Xavier's School for Gifted Youngsters first, in order to check on their daughter.[3] Warren Worthington III acted as the School's spokesperson in Xavier's absence, and demonstrated most of the School's locations to the visiting parents. John shook hands with Worthington.[3]

John wondered why one of the School's rooms seemed empty. Henry McCoy claimed that it was the school gym, and that a renovation was scheduled. The mystery room was actually the Danger Room, and the X-Men hastily escorted John out of the room.[3]

While leaving the School and driving away, Elaine and John bypassed a pedestrian who was standing outside the School. They paid no attention to the inoffensive-looking man, who was actually Mastermind of the Brotherhood.[3]

John and his wife were temporarily transformed into demons by the Goblin Queen, a clone of Jean.[4]

After the death of Sara, and possibly of her husband Paul, John and Elaine took care of their grandchildren, Gailyn and Joey.[5]

When Operation: Zero Tolerance occurred, John was aided by X-Man, his alternate reality grandson, in saving Joey and Gailyn.[6]

John Grey was killed by Shi'ar Death Commandos when they tried to completely eliminate the Grey Genome.[7]

John drove his own automobile.[3]

Like this? Let us know!
Retrieved from "https://marvel.fandom.com/wiki/John_Grey_(Earth-616)?oldid=6496372"
Community content is available under CC-BY-SA unless otherwise noted.