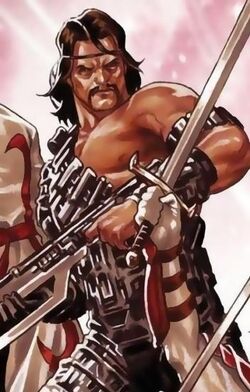 I figured the rules would change sooner or later... so I've been keeping busy. It's amazing what you can put together with a few pieces of scrap metal and a little know-how.

John Greycrow was a Native American from an unidentified tribe[5] who fought in World War II for the United States of America, but was executed for murdering his fellow officers. He was shot by a firing squad and was believed killed. However, because of his regenerative powers he survived and became a mercenary.[6] Decades later, he worked at a diner in Millstone, Arizona with Remy LeBeau and Claire DeLuc.[7] LeBeau later recruited him to join the Marauders on behalf of Mr. Sinister.

Scalphunter became a member of the Marauders, a band of assassins who were gathered together by the mutant thief Gambit at the request of the enigmatic mastermind known as Mister Sinister.

For their first mission,[8] the Marauders were tasked with the assassination of Sinister's former pawn Madelyne Pryor. Sinister had formerly erased any proof of her existence.[9]

Along with Arclight, Scalphunter posed as a paramedic while Madelyn was the sole survivor of a plane crash in San Francisco. She tried to escape but was hunted by Scalphunter, Arclight,[10] Prism, and Harpoon,[11] and was eventually shot by Scalphunter and left for dead,[10] only for her to recover in a hospital.[12]

Sinister next sent the Marauders to murder the entire population of the underground mutant community known as the Morlocks.[13]

In Los Angeles, the Marauders led by Scalphunter attacked the Morlock Tommy, killing her friend and Hellfire Club agent Richard Salmons, and letting her escape, only for her to involuntarily lead them to the Alley, the Morlocks' secret home in the tunnels beneath New York City. After finding the Alley, Scalphunter shot Tommy, and the Marauders entered the tunnels.[14]

Over the course of this mutant massacre, Scalphunter killed countless Morlocks, including Annalee and her babies.[3][15] He also clashed with the X-Men[3] and Power Pack.[16]

He was also tasked with the assassination of Polaris alongside Arclight and Sabretooth. Destroying her house and tracking her, they were unsuccessful in eliminating Polaris, as she was already possessed by Malice who used the magnetic powers of her host to defeat the three Marauders. Taking the leadership of the team from Scalphunter as Sinister intended, she also revealed that the mission was only a test of her power.[17]

Later, the Marauders were chastised by Sinister, as Madelyne Pryor wasn't dead, and he threatened to kill one of the Marauders if the mission wasn't accomplished. The Marauders consequently assaulted the San Francisco Memorial Hospital, and Scalphunter headed to Madelyne's room where he killed a nurse but was stopped in his execution by Rogue. Pryor used that opportunity to fight back, long enough for Dazzler to hit him with a blast thanks to Psylocke's telepathic monitoring.[9]

Following that brawl, both X-Men and Marauders scattered across town. Scalphunter took position on the Golden Gate Bridge, intending to shoot down Rogue, but was stopped by Longshot and Wolverine. He was quickly backed up by Scrambler and Sabretooth, and the two X-Men fell from the Bridge.[18] The Marauders then retreated from the city.

Later, the Marauders relocated their base to the Morlocks' tunnels, and Scalphunter and Sabretooth were sent to scout for intruders, only to be both defeated by Dazzler.[19] The Marauders escaped from the sewers, only for the battle to continue in the streets, right in the middle of the "Inferno" demonic invasion of New York City. Both mutant teams were also attacked by Demons and the armored soldiers of the Right. Scalphunter himself targeted Rogue who took revenge on him for their San Francisco encounter.[20] All of the Marauders were killed during the invasion.

Clones of the Marauders later clashed with the dimensionally-displaced young mutant known as Nate Grey after they attempted to assassinate Sinister's former servant, Threnody. Scalphunter's clone was killed in this conflict, as X-Man telekinetically pulled the trigger of his gun, killing Prism and wounding Riptide, before being killed by the explosion of his ammunitions, again caused by X-Man.[21]

Scalphunter was one of the still-powered mutants living in tents on the Xavier Institute lawn after almost all mutants were depowered on M-Day[22]. However, when Apocalypse came seeking people for his cause, Scalphunter chose to serve him. When Havok warned him, along with Fever Pitch and Skids, that they were in way over their heads, Scalphunter replied that Apocalypse had explained it all to them and was on their side[23]. Also during his time as a member of the 198, he became romantically involved with his Marauders compatriot, Arclight.

He left the institute at the request of Sinister and re-joined the Marauders and fought the X-Men to lay claim to the Mutant Messiah, Hope Summers[24]. In the aftermath of Messiah Complex, Greycrow was scared of the X-Men and ran away from the Marauders. He was located by Nightcrawler, who apparently converted him to Christianity.[25]

He later joined the X-Men on Utopia after being brought in by Weapon Plus to deliver new versions of Predator X to attack the X-Men. He was granted sanctuary after warning the X-Men and helping them slay the beasts.[26] Scalphunter fought alongside the X-Men during Second Coming[27] and was also a part of the Age of X, an alteration of reality by the mad mutant Legion.

Later, Scalphunter was tracked down by Magneto, who seemingly severed his arms and legs leaving him crippled.[28]

He later returned with his limbs restored and became a pawn of Magneto along with the other Marauders to be used by Magneto for his own uses.[29]

Scalphunter and the Marauders struck off on their own, once again massacring the Morlock population. This led an angered Chamber, their new leader, to rejoin the X-Men. When the X-Men re-encountered the Morlocks, the Marauders fought briefly, but ultimately surrendered, professing their innocence. Not believing them, Chamber burned them to death with his psionic flame.[30]

Scalphunter later appeared revived, presumably resurrected by the Five, and accepted Xavier's invitation to all mutants to join the nation of Krakoa. Being the only Marauder to join the island, however, he quickly fell into trouble after engaging in a shootout with multiple Morlocks, who sought revenge on him for his actions in the Mutant Massacre on the anniversary of the event. As punishment, Scalphunter was placed on a new iteration of the Hellions led by Mister Sinister, as a chance for rehabilitation, with their first job to capture Greycrow's ex-teammates in the Marauders who refused to come to the island. Scalphunter took the job of handling a feral Wild Child on missions.[31]

John, after the mission, was seen enjoying himself at the Krakoan shore and was visited by Wild Child and Psylocke.

Healing Factor: He has a healing factor sufficient enough for him to recover from gunfire, even after death.[6]

Suit made of technological components, allowing him to scrap for weapons.

Various firearms and ammunition, including explosive as well as "tracker" shells that follow their targets.[18]

Like this? Let us know!
Retrieved from "https://marvel.fandom.com/wiki/John_Greycrow_(Earth-616)?oldid=6445877"
Community content is available under CC-BY-SA unless otherwise noted.