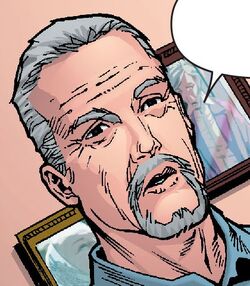 The father of J. J. Jameson, who was very distanced from his son. When he returned to New York City he met Spider-Man during a subway accident caused by the Shocker. Jameson being a great supporter of Spider-Man, felt sorry for the previous articles his son wrote about him.[1]

He started dating May Parker, and married her sometime later.[2] After various incidents in New York, like the attack of Alistaire Smythe and his Spider-Slayers, as well as the Serpent, he decided to move with May to Boston.[3]

May and John eventually moved back to New York, not long before Otto Octavius switched minds with Peter and usurped his life. During the Goblin Nation attack, Mary Jane Watson got the couple to safety. After Peter regained control of his body and defeated the Goblin Nation, he apologized for "his" behavior and decided to check May's hip prosthesis, made by Otto, and promised to sever all his and Parker Industries' ties with Spider-Man.[4]

After Peter's company was propelled to success and became a megacorporation, May and Jay became part of the Uncle Ben Foundation, a charity focused on providing help for the less fortunate and raise the quality of life wherever it could be possible.[5] After returning home from Africa, Jay fell victim to a rare and hereditary disease.[6] He was hospitalized at the Mount Sinai Medical Center,[7] where he died soon afterwards.[8]

When the demonic entity known as Kindred set the stage for his confrontation against Spider-Man, his target of torment, the body of Jay was among those of dead friends and family of Peter disinterred by the villain and placed at a dinning table.[9]

Like this? Let us know!
Retrieved from "https://marvel.fandom.com/wiki/John_Jonah_Jameson,_Sr._(Earth-616)?oldid=6338758"
Community content is available under CC-BY-SA unless otherwise noted.