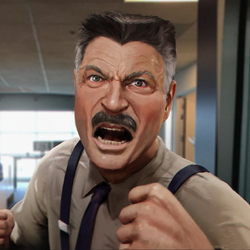 Welcome to "Just the Facts" with J. Jonah Jameson, alerting you to the threats you don't even know about.

J. Jonah Jameson was a famous newspaper publisher at Daily Bugle, in New York City. He is known for his criticism of superpowered people, specially for Spider-Man, which he considers a public menace and even had Mac Gargan become the superpowered Scorpion so he could defeat Spider-Man. He eventually retired from his job and began working on his own podcast, called "Just the Facts with J. Jonah Jameson", interviewing people and commenting about any city occurrences.[2]

The show released podcast of Jameson's deluded conspiracy rantings. Along with several callers pointing out he's just scapegoating Spider-Man due to his irrational hatred. Jameson also used his podcast to show support, and later to criticize Mayor Norman Osborn and Sable International for their actions on handling the Devil's Breath crisis and the Raft breakout.

Jameson almost had a heart attack when a new Spider-Man suddenly appeared on the city, helping fight crime alongside the original Spider-Man. Over time, Jameson also started to attack the new webhead, saying that he would keep an eye on both Spider-Men equally and that he would not hesitate on criticize them.

One year after the Devil's Breath crisis, Jameson had the recording session of the special Christmas edition of his podcast interrupted when both Spider-Men crashed through his studio while trying to stop a rampaging Rhino that had escaped from containment while being transferred, causing Jameson to call them a "feckless, treacherous, unhinged menace!"

Jameson is a very complicated individual. He comes off as a loud and rather bitter old man. His most infamous trait is his immense, almost irrational hatred of Spider-Man, and his constant attempts at proving that Spider-Man is a public menace.[2]

Like this? Let us know!
Retrieved from "https://marvel.fandom.com/wiki/John_Jonah_Jameson_(Earth-1048)?oldid=6445617"
Community content is available under CC-BY-SA unless otherwise noted.