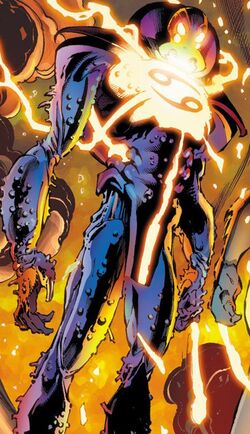 As Parker Robbins' cousin, John King routinely provided tips to his 'cuz' regarding places that would be easy to rob or had valuable merchandise. Usually accompanying Robbins, it was King's tip that led the duo to the warehouse where Parker killed the demon he stole his magic hood and boots from.[1]

When Parker accidentally shot a NYPD officer, King stayed behind and got pinched while Parker escaped.[2] Parker visited him in jail, and vowed to get him out.[3] After spending several days there, he was released when FBI agents needed his testimony to close the case.[4]

King wasn't forgotten as The Hood rose in infamy. As Robbins ran his gang of super-villains, John was his right-hand man, delivering messages for him, and escaping the situation(s) as Parker fought off the heroes.[5] Their friendship possibly fractured when, under duress, King led the Avengers to the Hood's hideout in Los Angeles. This information led to the Hood's capture and the end of his gang of villains. [6]

After returning from death, Thanos chose King to lead a new Zodiac team as Cancer, gathering a group of ambitious people who wanted to conquer the world, and gave them special suits which gave them super-powers.[7]

Their mission was to steal different powerful items and take them away from Earth in order to bring balance to the planet and the cosmos. Captured after a battle with the Avengers, King revealed the Mad Titan's plan to the heroes.[8]

Like this? Let us know!
Retrieved from "https://marvel.fandom.com/wiki/John_King_(Earth-616)?oldid=5483681"
Community content is available under CC-BY-SA unless otherwise noted.