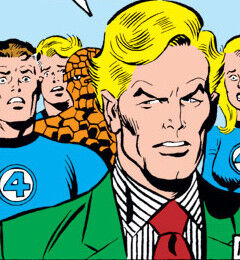 John Lindsay was a former soldier and politician best known for being the 103rd mayor of New York City from the 1966 to 1973.

Lindsay was mayor of New York when the Zodiac Cartel briefly took over Manhattan. He was freed upon the Zodiac's defeat at the hands of the Avengers and Daredevil.[1]

When an accountant from the town hall was murdered by an almost-intelligent tiger while working late, the Mayor -portrayed as Lindsay- was informed. The Mayor then confirmed the credibility of the witnesses and hired super-powered private eye Luke Cage -to avoid investigations by people like the Avengers who would not answer to law enforcement agencies- and because he wanted his agent to take orders. Cage found and neutralized the guilty party, an Alejandro Cortez, and collected the town's payment.[5]

A number of events depict John Lindsay as mayor of New York City during the modern age. Per the Sliding Timescale of Earth-616 these should be considered topical references.

Like this? Let us know!
Retrieved from "https://marvel.fandom.com/wiki/John_Lindsay_(Earth-616)?oldid=5817306"
Community content is available under CC-BY-SA unless otherwise noted.