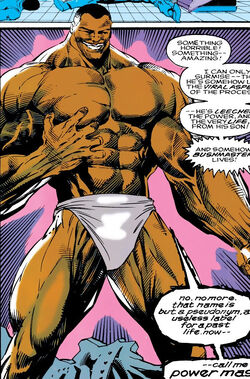 John McIver was born into poverty on Saint Croix in the Caribbean Sea. He and his younger brother Quincy were street-smart urchins who had to steal to survive. John possessed a violent temper, though, and in one incident he viciously slew a shopkeeper in a robbery gone wrong. Finding himself involved in street-level crime, he rose though the criminal ladder quickly and attained high status as a gang lord.[1]

During this time, he adopted the name of Bushmaster and had some experience and association with the Maggia. John was a powerful crime boss, criminal financier, and organizer, and was often confronted by the super-hero Iron Fist.[1][2]

McIver is best known for his attempts to lure Misty Knight to his side. Misty even faked a relationship once in an attempt to bring Bushmaster down.[3]

In an attempt to exact revenge on Knight, he hired Luke Cage to kidnap her and bring her to him. As an added incentive, he promised evidence that Cage was framed for the heroin possession charge he was imprisoned for, as well as holding Claire Temple and Dr. Noah Burstein hostage.[4] Bushmaster forced Burstein to mutate him as he had Cage, but was nonetheless defeated and soon became paralyzed by the process.[5]

Bushmaster later died when he was turned into a metal-like substance after his last-ditch effort to find a cure by reversing the process that gave Cage his powers failed, reverting to a permanently-immobilized statue (although his experiments briefly resulted in Cage temporarily losing his powers).[6][7]

At a later date, John Bushmaster's son Cruz tried to regain his father's fortune.[8][9] He initiated a plan to augment himself in a similar manner to his father, involving his father's apparent corpse, but his plan backfired and only granted more power to his father. McIver used that power to kill his own son and also drain Iron Fist of his powers, but the absorption and accumulation of so much power was too great for Bushmaster and he exploded.[10]

Like this? Let us know!
Retrieved from "https://marvel.fandom.com/wiki/John_McIver_(Earth-616)?oldid=5838264"
Community content is available under CC-BY-SA unless otherwise noted.