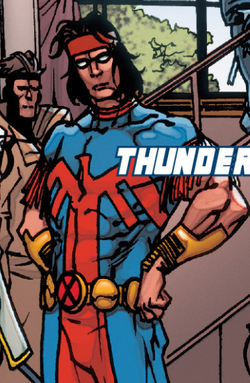 Thunderbird was one of the three deceased X-Men members who was brought to the present by Beast after the Krakoa mission. He went out for a morning run throughout the city before Genosha's Press Gang entered X-Topia airspace so they could kidnap Triage and Rogue.[1]

Thunderbird was chosen along with specific other members to head to Genosha in order to rescue their friends. Arriving in Hammer Bay, Thunderbird and the others made touchdown taking the Press Gang by surprise. He and Rockslide took on Bulletproof until a possessed Rogue joined the brawl against Rockslide leaving Thunderbird to go toe to toe with Bulletproof.

He had the upper-hand on Locke but Bulletproof caught has footing and rammed straight into Thunderbird which knocked both men off a high bridge and down unto the ground.[2]

Afterwards Thunderbird got back up when Bulletproof left to tend to Wolfsbane. He dodged a concussive blast from Havok but found himself caught up in a barrage full of spirits courtesy of Wicked. As the Press Gang and X-Men learned of the resurrection of Cameron Hodge by Dr. Kluge, Phoenix ordered Thunderbird to help with the evacuation of the city, while the rest of them went to go deal with Hodge.[3]

Seemingly those of the John Proudstar of Earth-616.

Seemingly those of the John Proudstar of Earth-616.

Like this? Let us know!
Retrieved from "https://marvel.fandom.com/wiki/John_Proudstar_(Earth-24201)?oldid=5671567"
Community content is available under CC-BY-SA unless otherwise noted.