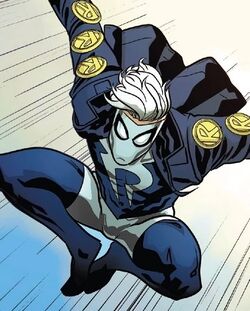 Now that we're all here and everything. The meeting of the WOULD-BE-HEROES-OF-THE-DISAFFECTED-GENERATION-CLUB is hereby called to order!

When Johnny was younger, his mother always said he was special, even calling him her "Little Hero". One day his mother was killed by the superhuman criminals Nanny and the Orphan-Maker. After losing his mother, Johnny was left with his burgeoning genetic mutation and an emotionally distant father, who appeared to blame him for her demise. Some time later Johnny would discover he was a mutant endowed with hyperactive agility and the ability to sense danger before it happened. For most of his life, he attempts to keep this secret from his widowed father and his long time friend Kathy.

Johnny would eventually enroll at Empire State University, where he would meet his future teammates Eddie McDonough, Cassie St. Commons, and Ritchie Gilmore. It was there that the quartet recruited by retired vigilante Daniel Lyons, a.k.a. the Black Marvel, into a group of teenage superhumans called the Slingers. Lyons provided Gallo with the costume and identity of Ricochet which was briefly adopted by Spider-Man during a time when the web-slinger operated as four different heroes to evade bounty hunters while falsely accused of a murder. Johnny readily accepted since as Ricochet he could freely use his powers to help people, without revealing his mutant nature.

On a training mission, while Hornet was trying to coax Dusk into leaping across a rooftop, Ricochet lost his balance and fell off the adjacent roof. Prodigy caught him, but told him that someone would have to die for Ricochet to take being a hero seriously. Prodigy then let go of Ricochet's hand, and Ricochet would have fallen and died if he hadn't grabbed Prodigy's hand with his other hand. Just after that, Dusk stepped off the edge of the roof to her death. Though it was no one's fault, Ricochet and Hornet agreed to keep Dusk's accident a secret. Unknown to them, Dusk came back to life, although how she came back has never been explained. Shortly after wards, Ricochet, Hornet and Prodigy had their first real adventure as a team, when they saved a man called Mac Garrity, who was trying to commit suicide by rerouting trains so that they'd kill him. Despite Ricochet and Prodigy stopping the trains whilst Hornet flew Garrity out of the way, this mission would come back to haunt them.

The team were soon sent to investigate the train lines beneath a hotel run by the Maggia. They found that the Maggia were dumping radioactive waste which was mutating rats into monsters. During an encounter with the rats, Ricochet caused a cave-in in order to escape, but Hornet was trapped as a result of this. Ricochet then called Prodigy to ask for his help, but Prodigy coldly smashed his phone, saying that real heroes could save themselves. Hornet was rescued by Dusk, although he didn't realize it was her at the time. Shortly after this, Ricochet and Hornet went to investigate the hotel upon its opening night. There, they encountered Prodigy, who was there with Black Marvel. Ricochet questioned Prodigy about his actions and Prodigy threw him off the hotel's roof. He was teleported back inside the hotel by Dusk, discovering that she was still alive for the first time. By now, the Black Marvel had triggered bombs he planted inside the hotel, so that he could save people and be a hero. Ricochet and Hornet confronted the Black Marvel about his purpose in giving them their costumes. Ricochet and Hornet then managed to escape the building before it burned down, but Prodigy seemingly died, holding up half the building to give them a chance to escape.

After the hotel fiasco , Ricochet, Hornet and Dusk met up at their unofficial headquarters, a billboard promoting New York's superheroes. Because Ricochet was skeptical about Dusk's return to life, she suggested that they play a game of truth or dare. After Dusk revealed all she knew about her revival (which wasn't much), Ricochet leaped backwards off the building they were on for his dare. When Dusk failed to save him, Hornet flew down and caught him a few seconds before he hit the ground. Upon returning to the top of the roof, Hornet flew off, giving Dusk the chance to kiss Johnny, showing that she liked him. This put a bit of a strain on their relationship, since Johnny already had a girlfriend and Hornet liked Dusk. Despite this, Dusk and Ricochet teamed up shortly afterwards to save Hornet from The Griz, the rail worker whom they saved during their first real adventure.[2]

End of the Slingers

Some time later, Johnny went to the hospital where Black Marvel had been kept after the hotel incident, only to find him gone. He called a meeting with the rest of the Slingers to discuss Black Marvel, and was given new explosive discs by Hornet. After testing one, Mephisto attacked the Slingers, bringing the superheroes on the billboard which was their headquarters to life. Although all the Slingers fought valiantly, eventually they were defeated and sucked into a pocket dimension where they found Mephisto holding the Black Marvel hostage. It turned out that Black Marvel had made a deal with Mephisto for the costumes which the Slingers now possessed. Mephisto told the Slingers that to save the Black Marvel, all they had to do was forgive him. Since the Black Marvel had made them heroes for his own purposes, they were all pretty reluctant to do so. They were then all forced apart, to do trials of a sort, unique to each one of them. Ricochet was in an arena, where he used his powers to overcome various traps. At first the people in the arena were cheering him on, but before long they started throwing rocks at him for being a mutant. Prodigy arrived and saved Ricochet, showing him that it had all been an illusion. After the others overcame their trials, Mephisto gathered the Slingers together again to test them as a team. He summoned thousands of demons for them to fight against, but these were all defeated by Dusk, who had started to realize her potential. Eventually, Hornet convinced the others to forgive the Black Marvel, and he and the team were set free. The Slingers then disbanded, but before doing so, Ricochet and Hornet spray painted "Slingers were here" at the base of the billboard which had been their base.[3]

Sometime after the disbandment of the Slingers, Ricochet had joined the Loners. The group tried to dissuade and discourage young people from becoming superheroes, noting that all of his efforts had not earned him one ounce of fame and recognition; though it was revealed that he blamed himself for Hornet's death at the hands of a brainwashed Wolverine. Alongside the rest of the group he was eventually drawn back into heroics.[4][4]

Johnathon was one of the few mutants who retained their powers on M-Day. Following the Civil War, he was listed as a potential recruit for the Initiative.[5] Johnny was later seen as a part-time student of the Avengers Academy.

After being liberated from Hell, a demon that had become fixated with the Black Marvel decided to impersonate him and fulfill his desire to continue teaching the Slingers. After outfitting the former supervillain Cyber with the equipment of the late Hornet, the Black Mask contacted Prodigy.[6] Without telling him about the Black Marvel's supposed return or the new Hornet, Prodigy asked Ricochet to trail Las Vegas vigilante Scarlet Spider.[7]

To his surprise, Ricochet eventually stumbled upon Hornet,[8] and joined forces with Scarlet Spider to learn more about the man wearing his late friend's equipment.[9] Ricochet and the Scarlet Spider tracked down Hornet to his employer Silas Thorne and confronted him. Dusk made an appearance to help them defeat a demonic creature summoned by Hornet.[10] After the Scarlet Spider brutally attacked Thorne, Ricochet decided to put aside his mistrust for Hornet in order to bring the Scarlet Spider to justice. After Prodigy reunited with the other three, and placed a vote of confidence for Hornet, the Slingers held the Scarlet Spider's ally, Cassandra Mercury, hostage at the Thorne Theater to make him turn himself over for hospitalizing Thorne.[7]

After the Black Marvel met up with the reunited Slingers for the first time, the quartet of heroes and their mentor were attacked by the Scarlet Spider and his posthumous namesake, Kaine. During the fight, Dusk turned against Black Marvel, since her abilities allowed her to detect that he was a demon.[11] After learning the truth behind their mentor's alleged return, the Slingers fought him and Hornet. After driving them off, the Slingers attempted and failed to apprehend Hornet while the Scarlet Spiders killed the demon. In light of the recent revelations, the Slingers decided to make peace with the Scarlet Spider, but holding him to his promise that he would give up on his extreme levels of violence.[6]

Superhuman Agility: Ricochet possesses the mutant power of superhuman agility, enabling him to leap great distances. He has incredible reflexes and coordination, and when combined with his leaping powers, can seemingly bounce off walls (ricocheting, as it were).

Danger Sense: Ricochet's mutant powers also give him a "Danger Sense", that functions much like Spider-Man's "Spider-Sense", allowing him to sense danger before it happens.

Skilled Marksman: Ricochet has been seen hitting targets from great distances with his throwing discs.

Johnny possesses the normal strength of a man in his age, height, and build who engages in regular exercise. Whether or not his mutation has increased his strength is unknown.

Ricochet has special throwing discs which he stores on the sleeves of his jacket, four on each. These discs can bounce off walls and targets with incredible force. Later, Hornet gave Ricochet new discs that could explode on impact. Ricochet's super reflexes and coordination enable him to throw his discs with amazing speed and accuracy. In the Runaways series, Ricochet used an E.M.P. disc at one point, although where he got it is unknown.

Ricochet usually travels by foot across city rooftops through the art of parkour, freerunning, or by riding on the top of buses.

The first person to use the throwing discs was Spider-Man.

Like this? Let us know!
Retrieved from "https://marvel.fandom.com/wiki/Johnathon_Gallo_(Earth-616)?oldid=6105527"
Community content is available under CC-BY-SA unless otherwise noted.